As some of you who participate on the DC Boards may know, SForHope, one of our admins, has a running series where he takes a panel from a famous or not so famous story and has us guess what story (issue for bonus points) it's from or make a joke about it. I thought, "Hey, this would be fun to do with the Marvel Boards!" and flipped through a couple of my trades to find a worthy panel. Lucky for me, I found one faster than I thought I would. Wise cracks and dominance assertion a-plenty. 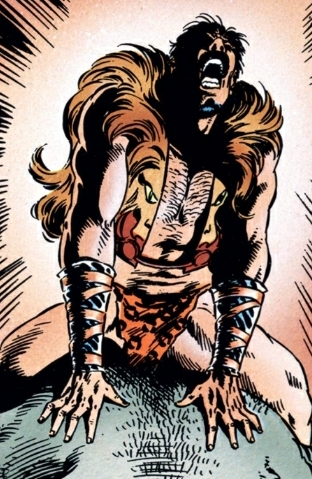 He is not tea bagging correctly

I think most of you are done, so I'll go ahead and give you the answer. It's from Amazing Spider-Man 294 and part of the Kraven's Last Hunt storyline. Kraven has not only defeated Spider-Man, but he donned his costume and proved himself better than him. In their fight, he jumps on top of a stuffed elephant and roars as the elephant roars to proclaim his victory.

Now, should I do this again? I think the seven up-votes speak for it, but I want a straight-forward answer.

I did not answer just because my sense of humor is terrible in my own language, and I couldn't crack a joke in English to save my life, but yes, you should definitely carry on.

I forgot to say the issue, I was too focused on what joke to make 😆 Keep going

When I first saw it, I kind of hoped he'd been stabbed instead of the other thing I was thinking.

Please keep going, this is great😂

(edited by The AnonymousHero)