Also i just read that link Krakoa sent, i dont think any of that has much comic grounding.

Im a frequent reader of xmen and i dont recall a single time the system was officially used in those ways.

Really their more so a measure of power as far as i know. Most classes are never used. The only ones that are is omega, beyond omega, and alpha. None of those have real definitions either.

Beyond omega is essentially a hyperbole for beings so powerful they outclass most other omega mutants. I.e. franklin richards probably.

Alpha are powerful top tear mutants that have reasonable limits but outclass most other mutants. I.e. cyclops, storm, havok, magneto

Theres really no definitions in comics about betab gamma, or anything lower. Their mostly rarely used, and only ever really used to define someone less than alpha.

On one occassion, a sentinel classified a mutant as beta, and stated it was recommended to use lethal force, suggesting the mutant had a pretty reasonable potential.

In age of apocalypse, the term beta and gamma was used to refer to a couple mutants who were impressively skilled but clearly below the power level of an alpha.

This article claims somehow its connected to their physical appearance, or how much they pass as human, ive legit never have seen that used in comics. If anyone has id love to know which comic is was used it, and maybe a panel scan because id be really surprised.

@Slyme quin I agree with you completely; I was attempting to answer their question in the quickest way I could, but as someone who reads a lot of X-Men comics, I agree that the article has little grounding in the comics. i apologize. 😊

According to Hickman's definition of Omega Level, it depends on one specific power rather than the might of the mutant as a whole.

If you have 1 power that is unmatched among mutants than you are Omega Level, no matter how powerful you are, if you are the 2nd best at your thing you don't get to be Omega (which is why Storm was "promoted" to Omega, while some reality warpers who happened not to be Franklin Richards are not canonically Omega anymore).

This particular definition also renders the notion of Beyond Omega Level absolutely meaningless.

Other than that, which is pretty recent and part of a not so wonderful read, everything you said is absolutely correct.

Beyond omega always just seemed like hyperbole to me.

I dont really understand why storm is considered omega level potential. Magneto performed some equally or more devastating feats and was considered alpha by apocalypse.

I just sum it up to largely plot device. The classification system is wack. They pretty much use it to just boast about a characters potential.

Both Magneto and Storm are Omega Level now anyway. This is the full list of current canon Earth-616 Omega Level Mutants:

Ugh. Too confusing and equally frustrating. It alternates too much based on writer's and plot device.

^Agreed. We have to kinda drop everything we knew prior, and subscribe to the new definition. Not a terrible definition at all....just.....ugh.

I don't think that is Hickman's definition. I think it's if your power's can reach an undefinable upper limit then you are omega level. That's why Forge, the most powerful technopath, is not omega. His upper limit has been measured and surpassed so he is not omega, even though he's the most powerful mutant for his power. That's also why Quentin Quire and Jean Grey are both omega level for telepathy. 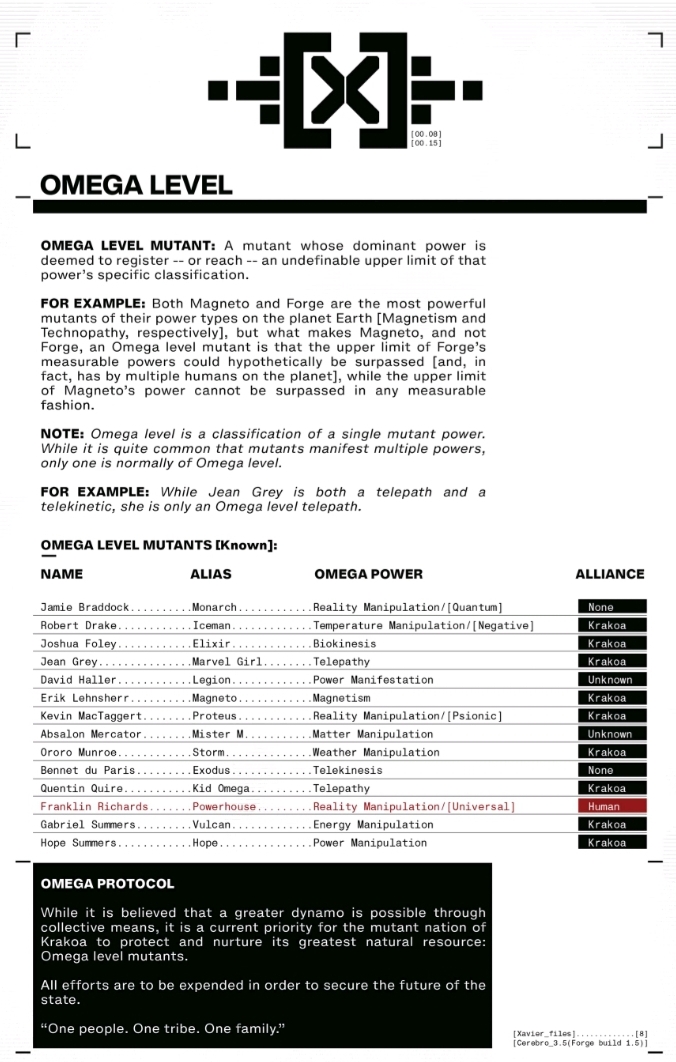 So that there is no debate about what is said