@BashengaTheFirst don’t forget the ubiquitous pose in the comics to get as much t and a in the same panel as possible.

So you're saying that Wanda is just a side-character with no personality and just eye-candy? Forgive me if I understood it wrong.

@IceMoh Well she has personality and I never said she didn't but she has only been used as a side character in all the movies she's been and her character is highly sexualised but those things will probably change with WandaVision coming out. 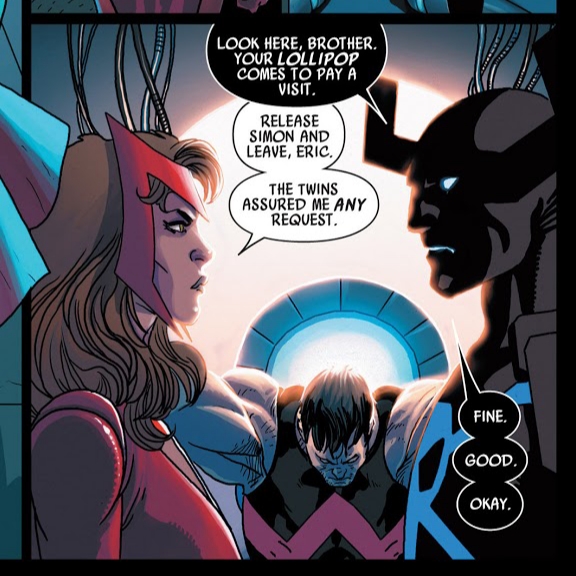 These men are what people in my hometown call F*ck Boys.

They are emotional and critique off personal emotions than actual valid facts.

How do you become a F*ck Boy??? There are two ways.

1. You were raised by a F*ck Boy (Father/Grandfather) who have a toxic mindset that women can't be more than just something for a man to do.

2. They've had a bad experience with a woman like maybe they got rejected or cheated on and had their heartbroken so now they have a vendetta against women.

Since they're driven by emotion they are quick to attack but most of the time they don't know what the f*ck they're talking. Like take when Marvel announced She-Hulk was getting a Disney+ series. While most people like myself was excited, it was also littered with f*ck boy comments like "They're making this character so she can replace Hulk and pander to women". Most didn't even know Jen was an already established character lol.

It's ok to not like something that has a female lead or is female centric but only if you critique it fairly and not just because its centered around a woman. I think the Catwoman movie and Elektra sucked because they were boring with an awful story. Was Captain Marvel amazing? No. Could it have been better? Yes. But I enjoyed it for what it was. These f*ck boys don't think logically, they see woman and they attack.

Men like that were never taught to value women or what they do. I was raised by a single mother and I was surrounded by other strong women like My sisters, Aunts, Grandmother's and friends so I've seen the strength of a woman all around me all my life and I learned to respect it. I didn't have my father growing up but I had my two grandfather's and they treated my grandmother's like Queen's and made sure to tell me when I got older that I do the same for my wife. They don't have that, they have this single minded idea of a woman and if they look like they are breaking away from that idea that they can't comprehend, they get emotional and they attack.

Just imagine these guys having daughters. Like are you really gonna tell your daughter she can't do or be something simply because she's a girl?

The F*ck boys are also the ones that attack anything LGBT or anything with a different race. They're ignorant and single minded.

Carol is one of the most misused and abused characters in comics. But, I don't think of the Captain Marvel movie as high cinema in terms of writing or direction. In short, they took one of the most powerful female characters from the 70s-80s and nerfed her until she was an ill-used and depowered version of herself to give her her powers back at the end. The story just didn't work with what I associate with Carol as Ms. Marvel or Binary. No mention of her intelligence background and only minor insight into pilot skills.

Carol didn't need to be put forth as a feminist icon, or the most powerful individual... She needed, like any character, to be shown what makes her unique, interesting and how she relates to others... We received none of that. Nor did we really become invested in her story. We knew the Kree were dicks from AOS and that gave us several strong but not overpowered or over-hyped female characters.

Come to think of it, Jessica Jones while a flawed character is more indicative of strength than Carol. Agent Carter showed more fortitude than Carol. Black Widow and Wanda were actually good characters which bring skill and power, without tokenism to the Avengers. The writers, directors, and producers dropped the ball with Carol, plain and simple.

BTW sexy is not the same as over-sexualized... None of the women in the MCU is treated as eye-candy solely, because none of them have been shown to show more skin than skill or power.

Again, im not entirely sure who this is directed to

The Supergirl TV show sucks, but for entirely different reasons. I watched the first 2 seasons and I refuse to ever watch that trash ever again. These Talking-Out-Of-Their-Balls Boys, TOTBB, just don't understand that female characters are awesome(Supergirl specifically😁) and they can't construct good and valid criticisms.

I remember a guy on YouTube *cough* *cough* Zach *cough* *cough* that was very sexist, racist, and homophobic when it came to comic books. Absolute cringe worthy content he produced and still produces(just looked it up). I watched one of his videos one time where he reviewed a Supergirl Vol 7 issue. It was a chore listening to him go on about "DC is finally making Supergirl sexy again" *gags*

I assume that it was a reference to NE Kara... *gags*

That said, I'm very confused on what this is about. I'm just gonna back out right now. I don't want to be here when it happens. I have enough experience with that.