I thought in celebration of Pride month i could do a series of respect posts for our best and brightest LGBTTQ2IA* characters. This is just a series of respect posts for character, not a place to discuss politics of LGBT. If you come with the intension of sharing homophobia, transphobia, biphobia, or any other discriminatory views on LGBT, please just recluse yourself from the post. This is just to give some love to our LGBTTQ2IA* characters, not a place to debate politics or share hatred.

Today our Pride character is: Deadpool

-What's do you love about the character?

-What do you dislike?

-What would you like to see out of the character?

-Do you have a character ship for them?

-What about the character do you connect with? 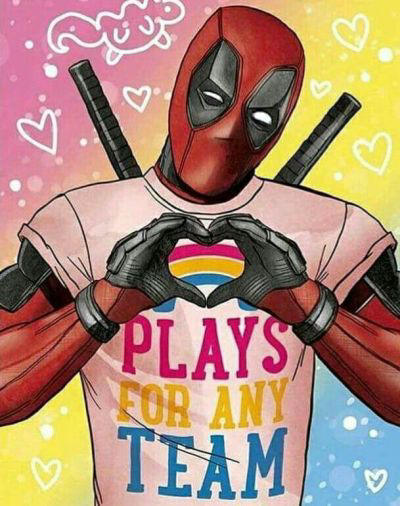 Well, i guess i could give some of my thoughts...

First off, i love Deadpool for plenty of reasons, his humor being toward the top. Especially since he is a very broken person under his comical facade. But he really has a desire to do good, as shown in Deadpool #20 (2016). As far as things i dislike, i'd have to think about it. There's not much. One of the problems may be that he doesn't really have very many good romances, but he makes up for that with awesome friendships.

I want to see his depressed side and truly heroic intentions more often. They show that he's really a broken guy with a good heart who masks his insecurities and issues with humor.

I connect with the depression/humor aspect.

Now for the shipping part.....

I honestly want to see him with a time-displaced older Laura Kinney, or an alternate universe version of her who's older. I just think they'd make a good couple. Idk why though lol. Maybe they wouldn't.

Now the tough part, his pansexuality.

I don't really agree with LGBTQ stuff. I like you and everything, Slime, and, at risk of me sounding like a jerk, i do have a close friend who is gay. I care about gay people, but i don't agree with romantic or sexual attraction to people of the same gender, nor do i agree that you should be able to change your gender. But, despite disagreeing with their views, i do really love and care about people in the LGBTQ community. But, so we can avoid an argument that'll get this post locked and just rile us up, let's leave that part of this discussion be, agreed?

Anyhoo, i wouldn't mind him jokingly flirting with Spidey just to mess him. I do it to my best friend. We both know i'm not serious, but it's just kinda a inside joke for us. Anyway, i just don't agree with Deadpool getting with a guy or something strange. i actually like him a lot as a single dude, but he could be good with X-23 maybe. I dunno.

I hope my answer didn't insult you or anything. I really do like you, Slime.

You know i love the way we disagree 😛 i have nothing but respect for you too. We stand on different sides but a person is more than beliefs. We can agree that our differences are differences. I don't stand for you're beliefs, but as Noam Chomsky once said "i may not stand for your beliefs but i will always fight for your right to have them.". In other words, we're all welcome to our thoughts. Im a string believer in freedom of thought. Though of course, that doesnt mean i wont debate with you, argue with you, or generally disagree 😛 but i digress. We wont do that here.

I like your general thoughts on him though. It would be weird seeing him with older Laura 😂

Yeah, of course, most of his relationships are weird😅 just look at Orksa😂

What do we mean by older? How old is wade?

Laura is anywhere between 18-21 from my memory so legally wise it wouldn’t be an issue.

Plus they both are effectively immortal.

He was cool until he became overhyped

I said older because, while he has the physicality of a twenty to thirty year old, Wade is probably around his fifties by now, from what I could gather reading up on it. Yeah, they’re both practically immortal, and it’s be fine if one was fifty and the other seventy or something like that, but Laura’s barely out of her teen years, so it just seems weird to me.

Anyway I wonder if wade really is 50 considering the sliding time scale. I’ve always placed him in his late 30’s to early 40’s even before he pretty much became Ryan.

Oh yes, I know there are plenty more awkward ones, ig it just bugs me for some reason... idk. Maybe it’s cuz she’s always a teen to me. But yeah, I’m unsure, as I got my age range from comic vine and reddit posts. I’ve always thought the same as you.

Yeah it seems like for slot of people she will always be a kid in their eyes and I think that has a lot to do with the Film Logan. But even that actress is older now(I feel old now) I have always seen her as older than me but that may be because I was watching her on tv and reading about her character when she was older than me at that time.