I really liked his fight with Annihilus. After most of the Nova Corps was defeated by the Annihilation wave, Nova kept on fighting and formed the United Front army. When the Nova and Annihilus finally confronted each other, the fight was so good. Annihilus had the upper hand for most of the fight but when Nova managed to get through Annihilus's armor and rip out his entrails he shouted, "This is for the Nova Corps". What a great fight. 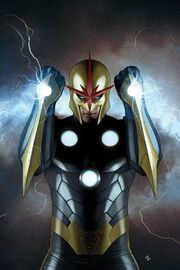 I am also a Nova fan, but I am not sure. I like his costume definitely, and how he went from b-list hero to starring in an event

@Liverpool I am just messing. 😂 you are good, sir.

He has a corny costume.

When he sacrificed himself in the cancerverse.

^thats literally what I said word for word in that other 3 word post.

^^honestly the editorial was just high. They killed off their only successful space character at the time and when he finally became famous. Bad decision

Anyways, prolly that he has fire coming out of his pecs.

Jk, no seriously, his character growth from being naive to reckless to then finally growing up and becoming a hardend war hero and all. Unlike current comics 😑

He is good, Oh shit it’s a trap

I think Richard Rider giving Nova (Samuel Alexander) his helmet was awesome. By the way, #NovaForLife