I mean don't get me wrong, Steve's a nice guy and all... But that's it. He feels like a generic great guy that could've come from France for all I know.

He just hasn't really made much of an impression on me as an American. That is, he hasn't had a whole lot of "American" moments. I mean sure, he's not different enough to be Captain China, or Captain Iraq, but I feel you could comfortably change his name to any other western democracy, and Steve would still fit.

I think that that’s the point right? That Captain America, when written well, stands for the values like honesty and honor he wishes to see in America and is less a representation of America itself.

Captain America is supposed to be a hero for all, not just Americans. The Falcon and the Winter Soldier show is starting to get into that a bit by contrasting Steve with his “made for America” counterpart, John Walker.

I know the comics have addressed this too but I haven’t read those, maybe someone more knowledgeable can talk about it better than me.

I think superhero comics are inherently american. Sure, every country can have superheroes, but they are a typical american thing. They are part of USA's pop culture (which is basically all of USA's culture, considering they didn't exist before 1776).

I think Captain America is just a natural outcome of the Golden Age. A wartime hero fighting for his country, superheroes were only american at that time, it was an American (english-speaking, to be fair, considering there were some 40s UK and Australian heroes) phenomenon.

I think Cap is "America" for a reason, mostly for the historical roots of the superhero medium.

To prevent anyone from saying I'm a patriotic Yankee, I don't even live in the continent "America".

I mean he's supposed to be an american ideal from the 1940s, which if you read hik in that lense its clear. However most contemporary america doesnt reflect those ideals.

He is Captain America because he represented America in WW2 and he was a war hero who fights for truth and justice and all the things at it's core America can be (not what it actually is right now which is what was explored in Ta-Nehsi Coates run). I mean it is possible if say Britian was the comic publishing giant that he could have been Captain Britian out of the circumstances he could have been really Captain (insert name of Ally country)

Captain America, a dude who literally goes around dressed in the US' flag and is written to be the living embodiment of the American Dream doesn't feel American enough?

We all know captain canuck is where its at anyways 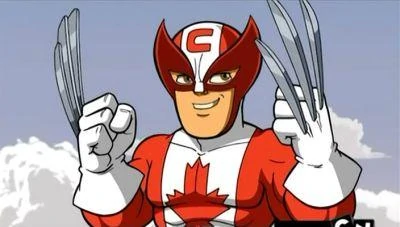