Felicia Hardy's father Walter Hardy was a world renowned cat burglar who, before his arrest, encouraged her to never settle for second best. If she loved basketball, she should work to become a basketball player and not just a cheerleader. During her freshman year in college, she had gone to a... 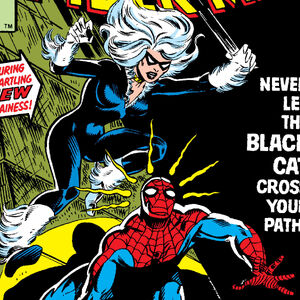 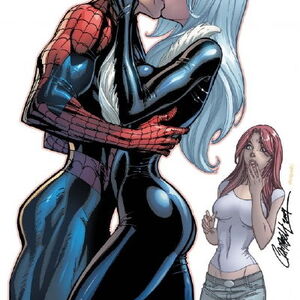 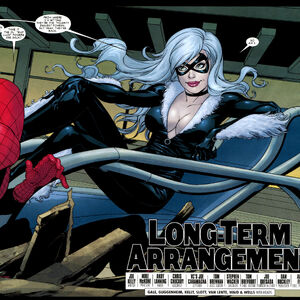 DISCLAIMER: Black Cat was, is and always will be Spider-Man villain. But she had a large role in Silk comics and that's why she's here.

Felicia Hardy a.k.a Black Cat is a master thief. She can cause bad luck and she stole Spider-Man's heart. But what does she have to do with Silk? Well, a lot.

After Peter freed Cindy from the bunker, Black Cat and Electro were the first villains they faced together. 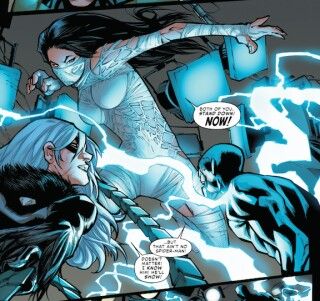 After Felicia kidnapped Marie Porter, Silk rescuesthe girl. However, the Repairman betrays Felicia,blows up one of her goons and puts Silk on an operating table. He is revealed to work with people who has Silk's parents. Before Cindy could find out about more Black Cat buries him under the ceiling for betraying her. 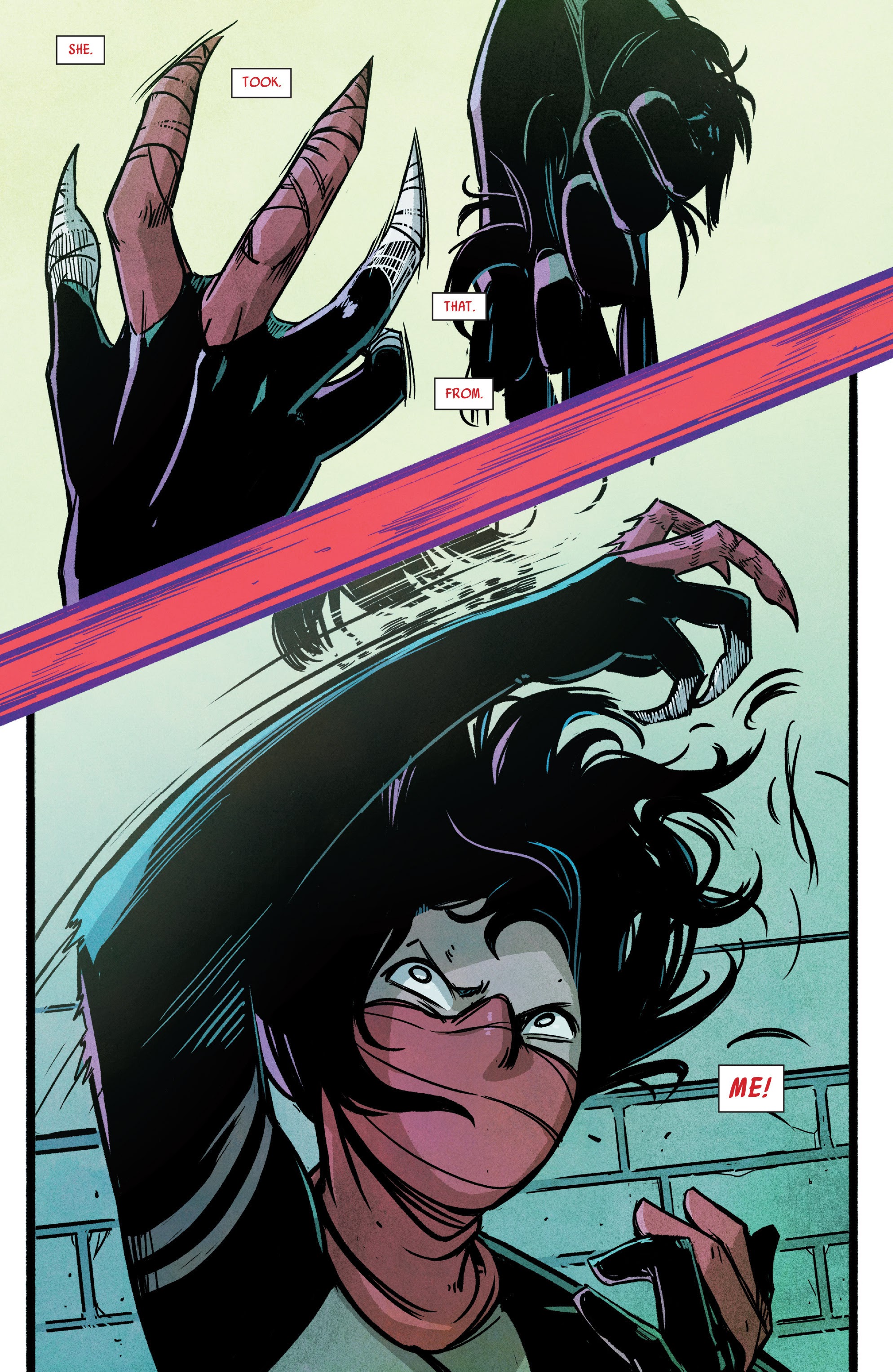 Silk gets her hair cut and tries to beat up the cat lady. However, she escapes.

In Silk Vol 2, we see that Silk accepted her offer and wants to stop Goblin Nation, while working undercover for Mockingbird. During one of her missiions, Killler Shrike betrays her. She attacks Black Cat who cures her. She beats up Killer Shrike, who, along with Silk, was part of her plan. Cindy gains Felicia's trust and they put an end to Goblin Nation.

Black Cat frees her from S.H.I.E.LD. capture, believing she's a villain. During the heist on Parker Industries both share their life stories.

Felicia tells Cin about her motives. Silk learns that Felicia wasn't all bad. She built a giant nest egg and was ready to retire if she needed it. But Spider-Man and S.H.I.E.L.D. locked her up. So she wanted to 'show them beyond bad'.

She pats Silk on the back and says she trusts her. Mockingbird tells Silk to be careful and take down Hardy for good but Black Cat is eavesdropping.

And Silk, just like The Repairman and Killer Shrike, learns in a hard way that lying to BC is a bad idea. 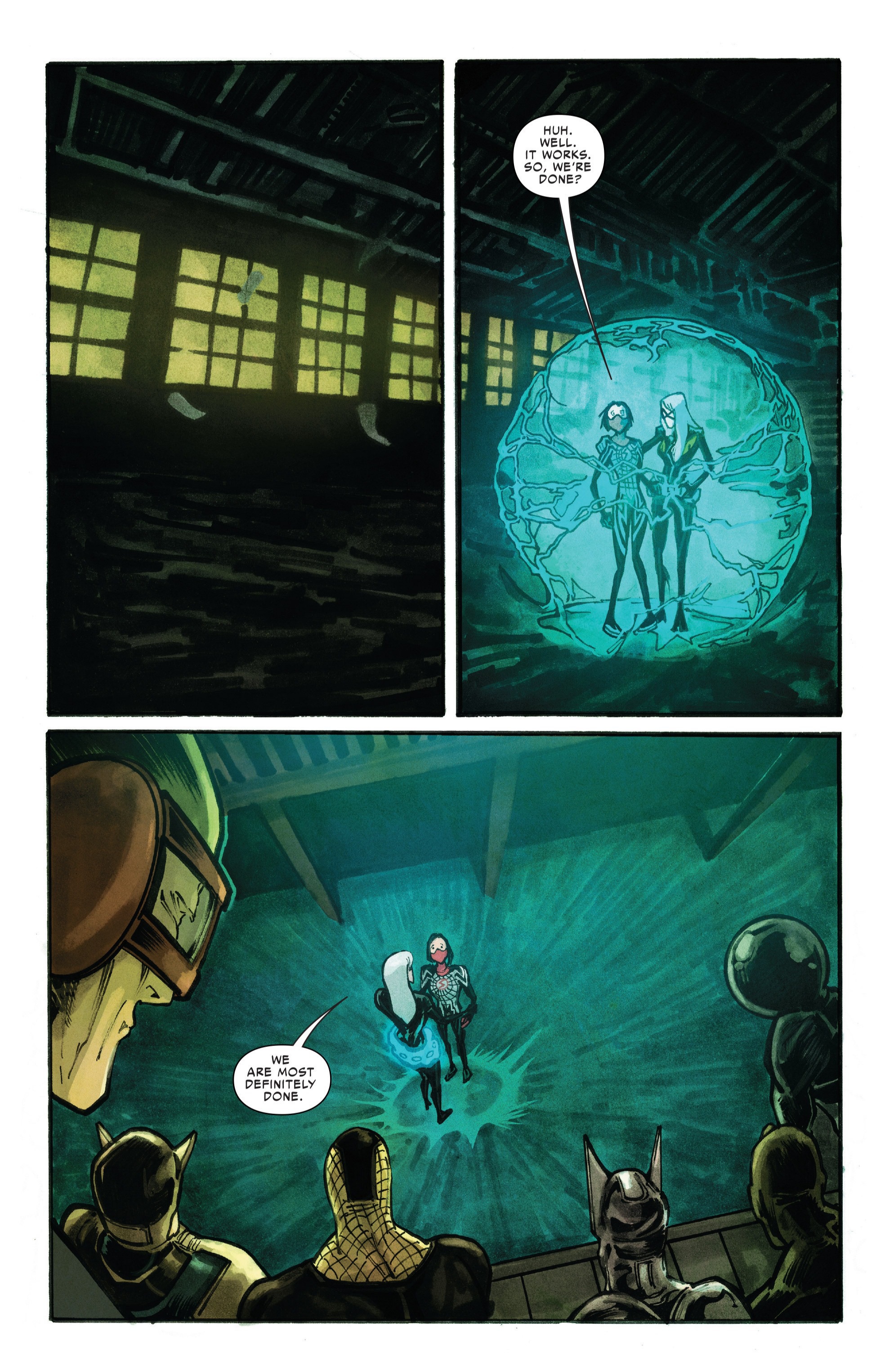 Silk is alive as Spectro rescues her but that was a close one.

So, why is Black Cat important in Silk comics? For several reasons One, Silk works for her as an undercover hero. Two, as I showed you (I hope) Black Cat treats Silk friendly but in a slightly different way than Rage.

What do you think about BC in Silk comics? I like her because she understood a little how the bunker experience was hard for Cindy.

Silk and Felicia were walking to Spider-Man's house. Cindy had been sensing his presence from The Spectacular Pizza Place. The women prepared themselves and broke into the house quietly. As they entered, Iron Man flew into them and stomped on Felicia. He aimed his repulsor at her.

Black Cat: Oh, the Iron Boy have heard about me. I'm flattered.

Felicia kicked Iron Man in the face. Silk used her web on Tony but he fried it. He was fighting the burglars vigorously. Suddenly, Black Cat used smoke bombs. However, somebody tied her up. It was Spider-Man. Silk tried to fight him but Iron Man knocked her out with taser. Hardy and Moon were defeated and tied with web to a wall.

Iron Man: Alright, girls. Party's over. What are you doing here?

Silk: We have important info about Hydra. And we need help. I'll explain.

Two unknown figures appear in front of the gate. They go inside. The guards hear them. They go there. Suddenly they get tied up with something like web. Silk kicks them and leave them on the ground before they could run and warn others. Meanwhile, Black Cat is working on getting inside. She gets there and locates their target. Jewellery worth hundreds of thousands of dollars. Suddenly, something grabs her arm. She grunts in pain. It turns out that the owner of the house was well prepared and hired Scott Lang.

Ant-Man: It seems that your plan won't work, kitty.

She kicks Ant-Man throwing him at wall. Ant-Man shrinks and punches her face. He returns to normal size and starts to choke her. He also covers her in ants.

Suddenly, he gets choked with web. Silk pulls him, helping Black Cat. At the same time, Felicia kicks Ant-Man in the crotch. Silk grabs his face with her fingers and covers it with web. Black Cat steals the jewellery. Then, both women escape.

Ant-Man: Crap. The owner will be mad. *in comms* Alright, Ant-Man Security Solutions, let's head out.

After a few minutes, Silk and Black Cat return to Silk's apartment.

Silk: *smiles* Thanks. You trained me well. Now this jewellery will pay off.

Black Cat: Duh! We could buy a car with just one necklace from here.

They both watch news on TV. They see Spider-Man saving people from burning building.

Black Cat: This Spider-Man is pretty neat. Have you ever wondered who hides behind that mask?

Black Cat: He seems kind of cute. We will probably meet him soon.

Teacher: Hello, students. Today I would like to present your new classmate. This is Cindy Moon. Miss Moon, maybe you'll introduce yourself.

Cindy comes to one of the tables and sits down next to a girl with platinum blond hair.

A girl: *whispers* Hi, my name is Felicia. Cindy: *whispers back* Hello, Felicia. Nice to meet you.

After school Felicia Hardy and Cindy Moon are good friends. Cindy returns home. Her first day at the new school was great. She lies in her bed. She falls asleep and doesn't notice a small spider biting her toe.

Cindy Moon is aware of her spider powers that she recieved a long time ago. She has also told Felicia Hardy about them. She moved from her parents' apartment trying to live on her own. However, she had problem with making ends meet. She calls her school friend who wanted to help her find a job.

Cindy Moon: Hello, Felicia. Cindy here. Do you have any job for me?

When Felicia starts talking about the job Cindy isn't sure at first. Hardy tells her that she is a burglar (like her father) named Black Cat and that she needs a partner. After some time, Cindy accepts Felicia's offer and her career as Silk begins.

"Sometimes dead is better" goes the saying, and the Black Cat film is no exception.

This is almost like that time Fox tried to make a Gambit film.