All posts by Mutant Paladin

If it’s not obvious, going by the version of the picture given and the members shown in given picture

Sorry just now seeing this, well since He’s dealt with stuff in the galaxy he’s really good with space tech and from what I’ve read so far he’s good enough with pro to face characters that can possibly go toe to toe with based level Carol Danvers and stark (from what I read), but prepped with space tech (really advanced level) , or future tech, he can possibly create weapons that can destroy planets

(edited by Mutant Paladin)
A reply to Kiyere0317
1

Between Reeds, Mr Terrific and bulma

A reply to Different dimension demon
0

I didn’t but the tears were at the door

A reply to Different dimension demon
0

My guess is some wakanda outreach program for ppl who are tech genius, I know Bruno from the Ms Marvel comics got to go to a school in wakanda for something like that

A reply to Different dimension demon
2

I’m scared too, honestly no matter if this movie is good or not, it’s always gonna feel incomplete

😂😂😂bruh i love that so much, family guy needed a good joke

7 of out of 10, it was funny but felt to force at times, and I wish Gor was shown killing more Gods, would’ve been seen as a bigger threat then only seeing him kill one and the rest of screen. Also I wish they didn’t talk Gor out of his wish instead of final battle, I get that he wasn’t gonna be comic accurate but it would’ve been nice to see him go down fighting, I will say though that I love how they change the abilities of the necrosword. Making it about to create shadow monsters instead of making Symbiotic like creatures so it doesn’t feel too much like we’ll get Knull down the line. Don’t get me wrong though, I love Knull but he would feel too early to bring in the mcu, and that’s a little build up villain really

At work so I can’t talk much, but the main reason I put arcade there was because I feel like he would win a majority of his battles if it wasn’t for plot armor at times, I mean honestly avengers arena did him the most good and that his gimmick is interesting, to me at least

Also thanks y’all , I’m working on a new series for TikTok which I’ll be covering lesser known villains

(edited by Mutant Paladin)
A reply to Cliffjumper154
0

Worth a shot, only characters I can think of at the moment with that color scheme

A reply to Cliffjumper154
0

A reply to Cliffjumper154
0

What villains in marvel do you think are underrated, focusing mostly on the comics 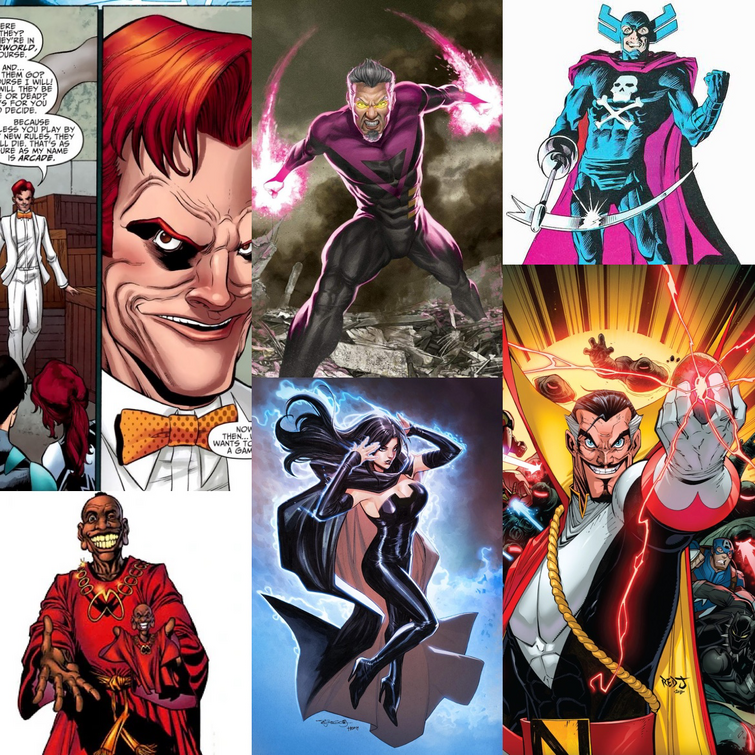 This is just some I think are underrated

Thanks dare, wish he specified which earth instead of just a basic picture

What is he at fault for?

I gotta say I Goa say I loved the episode, definitely one of the best television weddings I’ve ever seen, we all knew they would change her origins, especially since Inhumans are out of the picture, but the fact that they used the Clan Destines, Bravo Marvel, y’all using some deep lore characters/group here