XoS is completely different to what I expected, or at least the tournament element, I expected some huge fight with all of them at once. I'm not sure if Betsy is gone for good, I think if we have any deaths that big we will have more emotion and more mourning afterwards. The wedding was quite strange and it might be difficult seeing as he can't understand her but as you said they were pretty happy. I really don't know what is happening next or how many more little competitions are going to happen, but I am very much looking forward to seeing what Saturnyne is planning and what else is going on with Apocalypse because we haven't had the whole story yet.

Skyrim is pretty much the only video game I play regularly, I have played some Fallout but I prefer Sktrim much more. I love that kind of stuff and LOTR is my second favourite franchise after Marvel. In fact in two hours I will have completed my first marathon of all LOTR extended cuts in one go.

5th of November was the day Guy Fawkes tried to blow up the British parliament so we have fireworks and bonfires and burn a straw Guy Fawkes on it. I think it inspired V for Vendetta.

Not yet, it will still be a few months before that happens. All of HoX/PoX and the first wave of DoX is on there so you can use it to do any catching up. I would recommend that as otherwise you will be quite lost in XoS.

I thought this issue was pretty good, and Hickman clearly wants us on the edge of our seat for as long as possible. However, it did seem like a lot of what Genesis talked about we mostly knew. I mean quite a few of the panels are exactly the same.

I am a bit confused about one thing. So Genesis killed the first Annihilation and then became the new one? Because they keep referencing Annihilation but I can't tell if they are talking about Genesis or someone else.

A reply to Excelsior23
0

I disagree with Cypher, I think that would be way too obvious, especially after reading his issue. There were lots of hints that he was going to die but I thought it was too many to then actually kill him off. But maybe that's exactly what Hickman wants me to think.

Preferably, Apocalypse won't die, especially just after all of this new character development. Unless they wanted to just fit in a redemption arc before offing him.

Brian would make a bit of sense, especially now he isn't Captain Britain anymore, but I am way too interested to see what he is going to do as Captain Avalon.

I can't really think of any obvious people to kill off, either that or I don't want them to, but I think it's clear that not everyone is making it out of this tournament alive.

Gambit summarised pretty well. Other than that it would be very tricky and complicated to explain the rest so I'll leave it up to you if you want to read it. I like it a lot though so I would recommend for any X-fan.

@IceMoh Cut it in half and hit the back with a wooden spoon. This should knock out some of the seeds. Then keep on just tearing it apart to reveal the rest of the seeds. You want most of the pith out but a little will do no harm. It is a messy and time-consuming process but the seeds taste nice and are very pretty

I've always wanted an arch-nemesis but everyone is too nice.

It definitely has lost it's significance because now it seems every man and his dog has wielded Mjolnir and been possessed by the Phoenix force at some point.

This is probably due to writers thinking that this is going to make the arc more exciting and attract more readers, which sometimes will but often just annoys them, especially long-time ones. I will however say that Cap picking up Mjolnir in Fear Itself was the best part of that event in my opinion, and the only panel that has really stuck with me.

My family was fine actually, they are ok with gay or bi people but if you get a bit more niche, like homoromantic asexual, that I think they would get somewhat iffy.

It was worse at school, difficult at the time but now I think it's kind of funny. So we had finished a science lesson and I was singing I'm Coming Out by Diana Ross, because it is a banger, and one of my friends asked me if I was gay. I had planned it out so much in my head but never went through with it before but I took the moment and said yes. Somehow, even though I fit many stereotypes, he just did not believe me and thought I was joking. Now this was a little crushing because it was one of the hardest things I have ever done. So when he still didn't believe me after I said it many times I gave up. But then it was as if something had awoken inside of me and I found myself coming out to anyone and everyone. I'm still friends with the guy and we laugh about it now so it's all good and he does now believe me.

I reckon I could be a little poly but it's not something that is necessary for me. Four partners would be too much, but if it works for them then there is no judgement from me. The only thing would be my family, they like to think they are open-minded but I brought it up one time as just general conversation and they all thought it was weird and seemed quite opposed so it would just be easier to avoid it really.

Gen I only meant that those were really the only useful ways to directly fight a telepath with amplification that I can think of. He would need a very high level of amplification to hold his own against Jean.

If you paired him with another mutant then they would make a very good team, especially someone like Mimic who if you amplified his power could overcome the people with those powers with ease. With the evasion power too, he would be able to manage in a fight especially if he had some training in combat, then you could have all the action you want.

Self-preservation wouldn't do much against Jean, as she could just use her telepathy which he would be unable to avoid. I guess he could use the amplification to boost his telepathic shielding but that would still be defensive so he would need a more offensive power. Maybe he could boost Jean's telepathy and make her go insane?

Oh, she stole an ancient sword because she needed it to fight in a tournament. So yes she is exiled from Wakanda but her reason for stealing the sword was good.

I don't think so, where did you get that from?

Hickman explains Omega level better than I do: 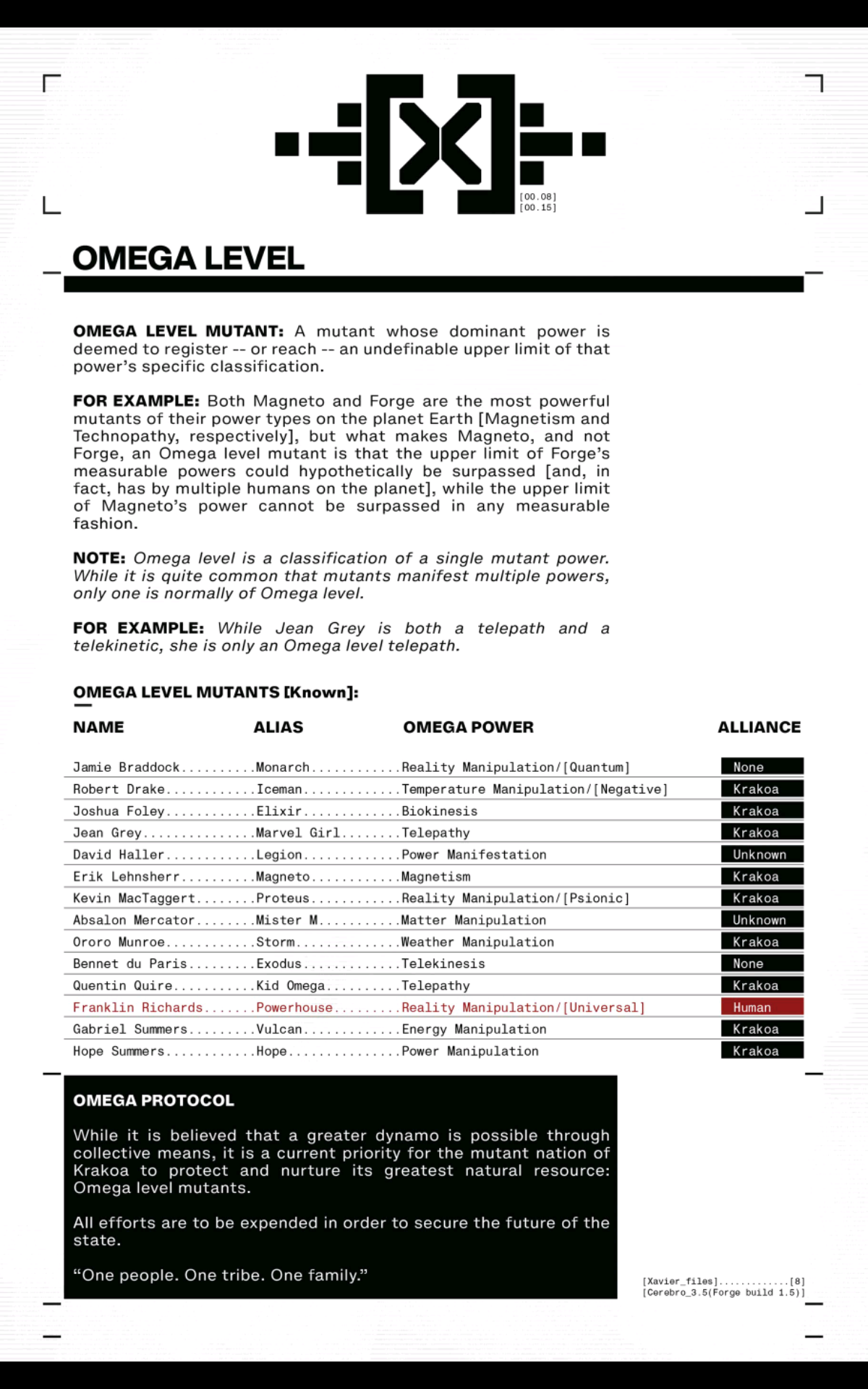 If their ability at self-preservation has a definable upper limit that could be surpassed then they are not Omega level. So I think most powers could be Omega as long as there upper limit cannot be measured.

As for how weak it is, maybe 3/10 but a measure of how useful it is would probably be more like 6 or 7/10 in my opinion, especially if a telepath could communicate the plans directly to the whole team as it comes into the brain of your OC.