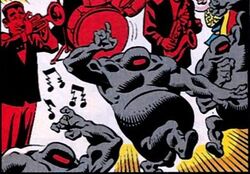 The (Really) Mindless Ones were almost-humanoid beings that lived in the Not-too-bright dimension (also known as the Dimly-Lit-Dimension-That-Didn't-Pay-Its-Light-Bill), serving their master Doormammoomoo to the extent of their limited mental skills.[1]

At some point, the (Really) Mindless One shared a holiday moment with Klea at the beaches of Raggadorr. Klea took pictures of this event, and later tried to show them to Doctor Deranged.[2]

They can resist several spells including the cold spell, the hot spell and the hovering hoops of Hula.[1]

They lack mind, watch constant TV and support Dan Quayle for president. The spell known as the Crimson Band of Cincinnati makes them dance and gets rid of them.[1]

Couch potato and politically-minded (weird that they are so involved with U.S. Presidency when they live in a different dimension and they support their own despot there).[1]

Like this? Let us know!
Retrieved from "https://marvel.fandom.com/wiki/(Really)_Mindless_Ones?oldid=5318722"
Community content is available under CC-BY-SA unless otherwise noted.