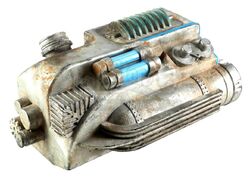 The 0-8-4 was the name given by S.H.I.E.L.D. to the Tesseract-powered weapon found in Peru. This technology was developed by former Hydra scientists after World War II.

Phil Coulson's team retrieved the device. As dangerous technology it was sent to The Slingshot for disposal. Unbeknownst to everyone, the device was actually sent to the Fridge, where it was later stolen by Hydra. Hydra agents John Garrett and Grant Ward used the device to respectively free prisoners and unseal the Gravitonium.[1]

Coulson later recovered the weapon and used it to vaporize Garrett just as made himself the new Deathlok. He then stored the device at Fury Secret Base, the Playground.[2]

Somehow, Colonel Victor Ramon got his hands on the weapon and was going to sell it to the Watchdogs to aid in their war on the Inhumans. The Hydra weapon about to be tested on Elena Rodriguez, who was captured chasing Ramon, when Daisy Johnson arrived to rescue her. A Watchdog managed to get his hands on the weapon and was about to shoot Elena as she was confronting Ramon, only for her to use her superspeed to evade the energy beam, which vaporized Ramon, and relieved the Watchdog of his weapon. Subsequently, S.H.I.E.L.D. recovered the Hydra weapon.[3][4]

Like this? Let us know!
Retrieved from "https://marvel.fandom.com/wiki/0-8-4_(Hydra_Weapon)?oldid=6420593"
Community content is available under CC-BY-SA unless otherwise noted.