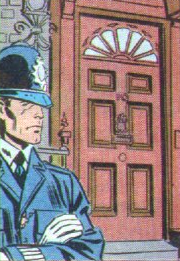 10 Downing Street, colloquially known in the United Kingdom as "Number 10", is the headquarters of Her Majesty's Government and the official residence and office of the Prime Minister of the United Kingdom of Great Britain and Northern Ireland.

The front door of 10 Downing Street cannot be opened from the outside, only from within, meaning that someone must be in the building at all times.

Like this? Let us know!
Retrieved from "https://marvel.fandom.com/wiki/10_Downing_Street?oldid=5832794"
Community content is available under CC-BY-SA unless otherwise noted.