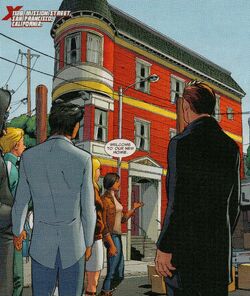 Following the schism that erupted between Cyclops and Wolverine, the X-Men found themselves split into two camps. While some left Utopia for the Jean Grey Institute of Higher Learning many, including the active members of the New Mutants squad, stayed on the west coast.

While most remained on Utopia, Dani Moonstar, leader of the New Mutants, decided that it was more important for mutants to not be sequestered away on an island or a school, and decided her team would relocate to San Francisco proper. After receiving the blessing of Cyclops, she introduced her team to their new headquarters, a large building located at 1128 Mission Street.[1]

Upon moving into the place, the New Mutants began meeting their neighbors, including kindly Latverian immigrant Mrs. Livitz, who rented the apartment below theirs, and Zig, a man who was secretly an Asgardian who lived next door and kept a wary eye on his new neighbors.[2]

Upon their return from a mission involving Blink and a sentient alien technology-empowered band known as Diskhord, the New Mutants were given a meal of Prokporzhki prod by Mrs. Livitz,[3] and when Mephisto arrived for his date with Magma, he was spied upon Zig.[4]

On the 1129 Mission Street live an Asgardian being:

Like this? Let us know!
Retrieved from "https://marvel.fandom.com/wiki/1128_Mission_Street?oldid=5764550"
Community content is available under CC-BY-SA unless otherwise noted.