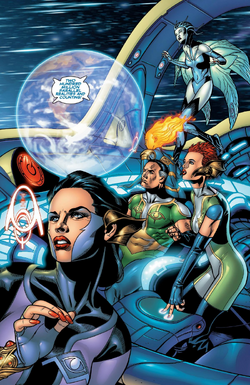 The 18th Kree Diplomatic Gestalt were a crew of Kree who, spread the way of the Kree across the world, aboard the Marvel.

During their missions, they participated to the negotiations in the Kree-Skrull conflict, which resulted in them being projected into the Macrospace, after a clash with three Astro-Gods caused space time to collapse. The crew passed across multiple realities in an attempt to return home.[2]

On their way home, they crossed ten billion realities, and were targeted by the Midas Foundation soldiers of the Prime Marvel Universe, and the ship crashed. While Captain Glory and Star Splendor were incinerated in cosmic dust by the trans-reality ship engines, Merree, Rogue Fantastic and the rest of the crew were killed and desiccated by Doctor Midas's scientists, except for Noh-Varr, who declared war to Earth in retaliation for his friends' murder.[3][1]

Nothing is known about the two remaining members, both powered females present in that team and in their (seemingly) evil counterpart.

Like this? Let us know!
Retrieved from "https://marvel.fandom.com/wiki/18th_Kree_Diplomatic_Gestalt_(Earth-200080)?oldid=5640206"
Community content is available under CC-BY-SA unless otherwise noted.