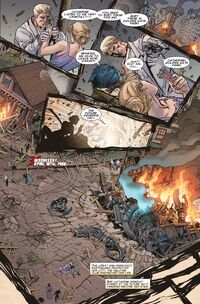 The immortal being known as the Forever Man was in San Francisco during the incident and was killed and later resurrected in the flames. Now a teenager again he was given the name "Morgan MacNeil Hardy" and considered the city his home and wished to return it to it's prominence before the quake.[2]

During the earthquake, the Tenderloin district was plunged into a cavern, becoming a haven for homeless people known as the Underground City.[6]

After the 1906 San Francisco Earthquake, Japanese immigrants helped to rebuild the city and the name was changed to San Fransokyo.[7]

It was revealed that Lenore Shimamoto caused the earthquake when her experiment with an energy amplifier caused a "Great Catastrophe".[8]