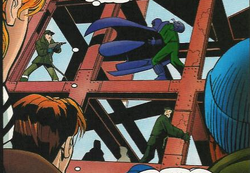 Peter Parker and Billy Walters were sent to 38th Street to cover some kind of disturbance caused by Prowler's appearance.[1]
Spider-Man saved Frank Rizzo, a construction worker who had fired Prowler from a previous job, but the villain managed to escape.[2]

On Earth-7642, Batman and Daredevil swung over the rooftops above 38th Street after agreeing to a truce.[3]

Like this? Let us know!
Retrieved from "https://marvel.fandom.com/wiki/38th_Street?oldid=5225287"
Community content is available under CC-BY-SA unless otherwise noted.