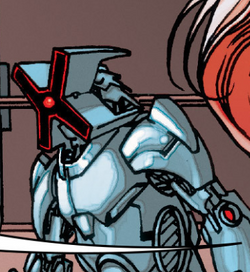 4107 is an artificial being who developed self-awareness. It assisted in daily activities as a strategic member of the X-Men. It involved itself in the battle against the Press Gang after they ambushed them in X-City to kidnap Triage and Rogue.[1]

4107 was responsible of handling mathematical calculations used to determine what members would function the best together with the highest success rate, which who Phoenix would lead into battle.[2]

Seemingly those of the Danger of Earth-616.

Seemingly those of the Danger of Earth-616.

Like this? Let us know!
Retrieved from "https://marvel.fandom.com/wiki/4107_(Earth-24201)?oldid=5667270"
Community content is available under CC-BY-SA unless otherwise noted.