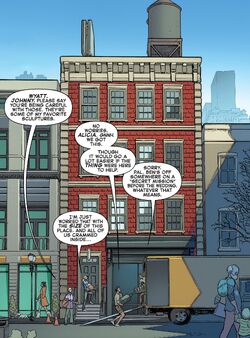 4 Yancy Street was an entire building owned by Ben Grimm, located in the Lower East Side neighborhood of the borough of Manhattan in New York City.

Following the reformation of the Fantastic Four after Mister Fantastic and the Invisible Woman returned from a Multiversal exploration, Ben offered them to turn the building into their new headquarters since the Baxter Building had fallen into the hands of the Fantastix ever since.[1] Together with his daughter, Valeria, Mister Fantastic folded additional dimensions inside the building, making its interior square footage roughly twice of that of the Baxter Building while on the outside its appearance remained unchanged.[1]

When the Fantastic Four confronted the returned Griever at the End of All Things, they attempted to defeat her by luring her inside the evacuated 4 Yancy Street. Once she was inside, Mister Fantastic remotely deleted all the additional dimensions within the building, causing it to fold into itself, but the plan failed.[2] Following the Griever's defeat, Reed used a spatial compensator to decompress the remains of 4 Yancy Street and restore the building. However, Richards only managed to return the building to its original specifications, which prevented the restoration of every dimension that he and Valeria had folded into it. As a result, some of the equipment and personal belongings of the Fantastic Four became lost, including the entierty of the Human Torch's room.[3]

Like this? Let us know!
Retrieved from "https://marvel.fandom.com/wiki/4_Yancy_Street?oldid=6466935"
Community content is available under CC-BY-SA unless otherwise noted.