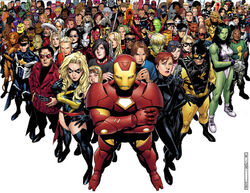 In the aftermath of the Civil War, the pro-registration side stood victorious over the anti-registration and Tony Stark was appointed Director of S.H.I.E.L.D. The 50-States Initiative was launched, which called for one S.H.I.E.L.D. sponsored superhuman team for each state. The first group of young heroes were sent to 'Hero Boot Camp' located at Camp Hammond, in Stamford, Connecticut, the site of the explosion that launched the Civil War. There, the trainees learned how to respond and adapt to different situations. Before, the US Government feared of the potential of a Superhuman arms race; with mutants being the most diverse candidates to be used by terrorist groups, rogue and hostile nations. With the advent of M-Day the mutant society were no longer an issue; most of the ones still powered were largely consolidated in the United States. However, the US did lead the world in Other phenomena that created superhumans. The result, the US won the Superpower Arms Race unopposed.

There was a special "black ops" team within the Initiative, known as the Shadow Initiative, that reported only to Gyrich. The team eventually consisted of Bengal, Trauma, Constrictor, Mutant Zero, and the Scarlet Spiders.

Among the first wave of recruits were MVP, Cloud 9, Armory, and Trauma. MVP was one of the most capable young heroes. During a training exercise, however, Trauma's fear targeting powers accidentally caused Armory to lose control of her weapon, the Tactigon, and MVP was killed pushing Cloud 9 out of the way. In response, the Initiative had the Tactigon stripped from Armory's arm, and threw her out of the program. Gyrich informed everyone present that the mishap had "never happened".[4] Later, Baron Von Blitzschlag discovered that instead of being enhanced by the Super Soldier Serum as everyone believed, MVP was actually an "Übermensch", the ultimate human specimen.[1] Von Blitzschlag used MVP's body to clone several duplicates, three of which served as the Scarlet Spiders. Another clone was sent back the MVP's home to resume his life.

When a crisis involving the president and the Hydra terror-carrier arose in Texas required the new recruits to join the fray, Cloud 9, Komodo, Hardball, Gauntlet, War Machine, Justice, and Yellowjacket all arrived on the scene. As the attack escalated, Yellowjacket deployed the secret weapon he had developed to infiltrate the carrier's shields, a small vibranium capsule he hid inside of. When he breached the shields, he grew to enormous size and forcibly redirected the carrier to crash, purposely riding it out.

Hardball was forced by a Hydra agent with knowledge of his real name to steal a piece of the S.P.I.N. tech -- a new type of nanotechnology that, when fired in projectile form, could cause a superhuman to lose access to his or her superpowers instantly. As the most promising of the new recruits, Komodo was given an official assignment to take down Spider-Man with S.P.I.N. While Spider-Man was fighting the Sinister Syndicate, consisting Hydro-Man, The Shocker, and Boomerang, both War Machine and Komodo headed to the scene of the battle. Komodo and War Machine caused the Sinister Syndicate to flee, and Spider-Man was left to battle the duo. The Scarlet Spiders, who had been cloaked during the fight, revealed themselves. They took down the Syndicate while Spider-Man escaped.[5]

When the Hulk returned from space with his Warbound, the missing cartridge of S.P.I.N. technology remained undiscovered by Tony Stark. Stark's attempt to remove Hulk's powers during their conflict failed, making Hardball directly responsible for the early failure to contain the Hulk and prevent massive amounts of damage and casualties. Initiative members were assigned to protect the crowd and refrain from engaging the Hulk, though opted to disregard orders and engage Hulk and his Warbound. Henry Gyrich ordered his Shadow Initiative to save the Initiative trainees.[6] The Shadow Initiative infiltrated into Madison Square Garden, where the Hulk had built an arena to deliver captured heroes for their punishment. It was there where they were confronted by some of the Hulk's Death's Head guards, and Mutant Zero defeated them all. Soon the team was confronted by the Hulk, himself, in which he defeated almost all of the Shadow team members. The crisis ended when Hulk was defeated and placed into S.H.I.E.L.D. confinement.

The camp's drill-instructor, Gauntlet, who had made several nasty remarks about the dead New Warriors, was brutally attacked by the former New Warrior Slapstick, who left a mark on his body: 'NW'. Following speculation that the attacker was an Initiative recruit who was a former New Warrior, Justice, Debrii, Slapstick, Ultra-Girl and Rage were imprisoned and interrogated. When Gauntlet awoke he claimed he was attacked by the Ghost, and the suspects were released.

Taskmaster replaced Gauntlet as Camp Hammond's drill instructor. Several new Initiative recruits arrived at Camp Hammond, including Ant-Man, Crusader, Melee, Geldoff, Dragon Lord, Geiger, Red Nine, and Diamondback. Taskmaster studied MVP's and Spider-Man's moves, in order to teach the MVP clones, in their role as Scarlet Spiders. However, the result of the previous clonings of MVP impressed Initiative administrators enough to attempt to fill places within the Fifty-State Initiative with further clones of MVP. A new Michael Van Patrick clone was fitted with the Tactigon and set forth, but lost control. Under the name "KIA", the clone went on a murderous rampage throughout Camp Hammond in an attempt to seek revenge for MVP's death.[7] The KIA clone caused destruction killing and injuring many Initiative trainees and staff. The Mighty Avengers showed up to help and Cloud 9 and MVP defeated K.I.A.[8] However, Justice's team, with the exception of Ultra-Girl, left the Initiative. Justice could no longer go along with the Initiative's lies and cover-ups. He planned to use his team, Counter Force, to make sure the Initiative didn't abuse its power. He agreed to turn himself in if he broke any laws.[9]

Hardball, Komodo, Cloud 9, Ultra Girl, 3-D Man, and Thor Girl graduated and were given states to protect as members of The Initiative, along with new costumes. Trauma graduated and became a member of the Initiative staff.

In addition to the Hank Pym impostor, the Skrulls had infiltrated on each of every superhero team of the Initiative. While the cadets were dispatched to fight the Skrulls, "Yellowjacket" welcomed the Skrulls to use all the Initiative bases to create a massive Negative Zone portal that would take the entire country. 3-D Man (Delroy Garrett) joined up with the Skrull Kill Krew to kill the imposters on every superhero team. Komodo, Hardball, Jocasta, Cloud 9, Gravity, and Devil-Slayer joined the team as well. Devil-Slayer's teleportation ability aided them in killing all Skrull impostors within the Initiative. At the final fight at Camp Hammond, Crusader (Z'Reg), a Skrull with good intentions and an Initiative cadet, killed Criti Nol. Then 3-D Man shot Crusader after discovering his identity as a Skrull.[10]

Following the aftermath of the Secret Invasion, the Fifty-State Initiative was shut down and the Thunderbolts Initiative was established when Norman Osborn took over as director.[11] Gauntlet took control as head of Camp Hammond because of his position as the highest ranking officer left. Despite an offer by the Gauntlet, the real Hank Pym chose to leave the camp, as he was never really there in the first place.[12] Those that had been replaced by Skrulls met with Doc Samson at Camp Hammond as part of a support group. While noting the hostilities over the shooting of Crusader, 3-D Man left the Initiative to hunt down any Skrulls still hiding out on Earth.

Some of the latest recruits graduated and were assigned to different teams. Batwing became a member of the Shadow Initiative, Melee was assigned to additional training to become a Camp Hammond instructor for martial arts, Annex became a member of the Mavericks (New Mexico) and Red Nine of The Cavalry (Georgia). Geiger also graduated. Camp Hammond instructor Stingray became the new leader of the Point Men (Hawaii). Because of their villainous pasts, Sunstreak and Prodigy were not assigned to an Initiative State Team yet, but had to remain under training at Camp Hammond. Since Gorilla Girl felt she was typical cannon fodder she decided to go home and be listed as a reserve member.

Under repair at Camp Hammond, the Thor-clone (now dubbed Ragnarok) was activated by a safety measure built into it by the Skrull that posed as Henry Pym, Criti Noll. Thinking he was Thor, Ragnarok retook his hammer and went on a rampage easily dispatching the Initiative and Counter Force, who rushed to stop his violent march of destruction. Ragnarok killed Michael, a Scarlet Spider. Baron dismissed the notion as futile, pointing out that while Ragnarok could easily kill everyone, he would not change the fact he was an android-clone based off of the real Thor. Unconvinced, Ragnarok was shown proof that such methods were possible when one of the Scarlet Spiders revealed he and his "brothers" were all clones as well. Ragnarok resolved that it mattered not whether he was or wasn't a clone, but rather that his warrior's resolve was true. He flew off to presumably confront Thor and his fellow Asgardians.[13]

Following Ragnarok's attack, Counter Force decided to bury Michael Van Patrick's body and confess to the world about Michael's death and the clones. This gave Norman Osborn the opportunity to shut down Camp Hammond in his plans to dissolve Tony Stark's 50-State Initiative.[14]

Members of The 50-State Initiative included:

Other sanctioned heroes by assigned location

Jet-packs for the trainees

Like this? Let us know!
Retrieved from "https://marvel.fandom.com/wiki/50-State_Initiative_(Earth-616)?oldid=6482081"
Community content is available under CC-BY-SA unless otherwise noted.