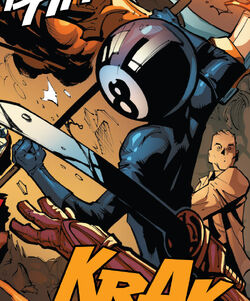 After Jeff Hagees was killed by the Wrecker, his gear he used as 8-Ball was sold by the Hobgoblin to an unnamed criminal, who later came to serve under him.

8-Ball was present during a battle between Hobgoblin's forces and the Goblin Underground. He, along with every other Hobgoblin franchise, joined Team Goblin when Green Goblin apparently killed Hobgoblin, really Kingsley's butler Claude.[2]

8-Ball later appeared as a member of Swarm's incarnation of the Sinister Six.[3]

After dealing with Porcupine, Hobgoblin regained 8-Ball's allegiance to him.[4]

Seemingly those of Jeff Hagees.

Seemingly those of Jeff Hagees.

Like this? Let us know!
Retrieved from "https://marvel.fandom.com/wiki/8-Ball_(Hobgoblin)_(Earth-616)?oldid=6429615"
Community content is available under CC-BY-SA unless otherwise noted.