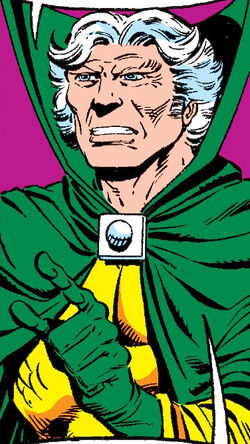 While Hercules was on a return trip to Earth, he was summoned by A'Lars to Titan. Arriving at Titan he was greeted by Mentor and his son, Starfox and informed he was summoned here because Apollo had recently crashed on the planets surface and was requesting to speak to Hercules. Apollo warned Hercules that only death awaits in Olympus and died in Hercules' arms. Mentor invited to Hercules to stay while they scanned ahead and ensured everything was good so Hercules didn't rush into anything dangerous. I.S.A.A.C informed Mentor that in order to scan Olympus, all non essential systems would need to be shut down. This allowed Shreck, a Thanos worshipper, to sneak into the city on Titan undetected and break into Mar-Vell's tomb and steal his Nega-Bands who used them to attack the Titan Eternals. Eventually, Hercules and Mentor were able to defeat him and Mentor offered to accompany Hercules on his journey to Olympus, but was declined.[1]

Like this? Let us know!
Retrieved from "https://marvel.fandom.com/wiki/A%27Lars_(Earth-829)?oldid=4806681"
Community content is available under CC-BY-SA unless otherwise noted.