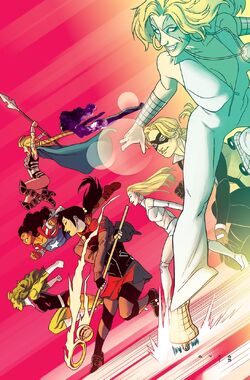 Base of Operations
Hall of Justice, Arcadia
Affiliations

Arcadia is only strong as long as we are united, and A-Force is her defender. It's our honor and duty to protect our island and her people. And that's exactly what I mean to do.

The domain of Arcadia is defended by the all-female team, A-Force, which is led by Arcadia's Baroness, She-Hulk. One day, a megalodon appeared off the coast of Arcadia, and the A-Force took it down. After the creature had been subdued, Ms. America lifted it and threw it away into the zombie-infested Deadlands. This action unfortunately partially damaged the Shield. This offense caused Ms. America to be arrested by the Thor Corps and exiled to the Shield to guard it. The Sub-Mariners were later summoned by the A-Force to find the origin of this creature. That same day, a mysterious girl crashed into Arcadia's Bishop Lighthouse and was found by Sister Grimm.[1]

She-Hulk was confronted by three members of the Thor Corps for going into another domain without permission, but she stunned them and escaped through the portal to return to Arcadia. She-Hulk realized that the portal was created using magic from Arcadia, meaning that there was a traitor among with A-Force. She informed her teammates of this revelation. However, the three Thors that attacked She-Hulk in the Sentinel Territories come through the portal. Medusa managed to throw the Thors back through the portal before it closed, but she died in the process. The Thor Corps later entered Arcadia in search of She-Hulk, but She-Hulk was hidden within the strange girl, who was the living embodiment of a universe.[3]

A-Force appeared to have disbanded, and the Thor Corps felt that it was best to appoint Loki as the next Baroness of Arcadia. However, A-Force now realized that it was Loki who was opening all those portals in order to discredit She-Hulk as Arcadia's Baroness and move in to take her place. A-Force confront Loki, subdue the villain, and restore She-Hulk's reputation. Refusing to be defeated, Loki used her power to destroy a portion of the Shield that bordered the Deadlands, causing an army of zombies to invade Arcadia.[4]

She-Hulk quickly mobilized A-Force to fight off the zombies. Many heroes joined A-Force including some male heroes that resided on Arcadia. A-Force was also helped out by the Sub-Mariners; Thor (Sif), Thor (Gamora), and Thor (Brunnhilde) of the Thor Corps; and Arcadia's X-Men. Even with combined number of heroes fighting the zombies, the undead overwhelmed them; however, to save her new friends and the domain, Singularity stepped in, absorbing all of the zombies into herself, before flying up into the sky, and exploding in a flash of light while saying goodbye.[5]

Retrieved from "https://marvel.fandom.com/wiki/A-Force_(Earth-16191)?oldid=5669879"
Community content is available under CC-BY-SA unless otherwise noted.