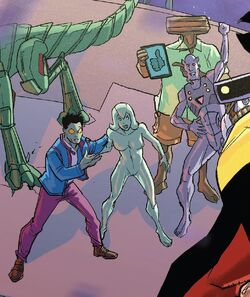 The scenario that took place in this reality manifested on Earth-616 in the form of a virtual dream within the eScape that Arno Stark was submerged into by Tony Stark when he encased Arno in his Virtual Armor in order to stop his plan to take control of humankind to combat the non-existent Extinction Entity which was a delusion caused by his relapsing illness.[1]

Like this? Let us know!
Retrieved from "https://marvel.fandom.com/wiki/A.I._Army_(Earth-TRN813)?oldid=6239739"
Community content is available under CC-BY-SA unless otherwise noted.