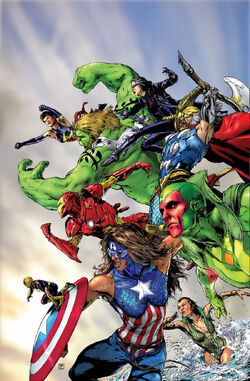 The A.V.E.N.G.E.R.S. Initiative was formed by Madame Natasha Romanova in the wake of the Zero Day, an event during which Thanos invaded Earth and killed roughly half of its heroes. The heroes who were left mobilized and managed to stop Thanos, killing him through a combination of magic and science.[3]

Madame Natasha's team expanded over the following years, and continued operating thirty years into the future. One of its members was Danielle Cage, who had taken up the mantle of Captain America by that time.[2]

When the evil Moridun used Demiurge's body to wreak havoc and destroy reality, the Avengers tried to stop him to no avail, and costing them three members. The team was forced to retreat back to their base, from where they traveled back in time to the year 2016 in order to prevent their dire future from happening.[1]

After arriving to the Avengers Island of the New Avengers, Captain America explained the situation to the local heroes. The Demiurge from this time arrived and confronted the future Avengers, due to being under the influence of Moridun, leading to a fight between the two Avengers teams. King Hulk tried to convince his past counterpart, Hulkling, to kill Demiurge while he was weakened, but Hulkling resisted. In the end, King Hulk's past self was was able to reach out to Demiurge in his mindspace, prompting the young hero to fight against Moridun's control and ultimately expel the evil wizard from his mind.

Demiurge's victory over Moridun caused a temporal divergence that sent the future Avengers back to the future, albeit a peaceful one.[4]

Retrieved from "https://marvel.fandom.com/wiki/A.V.E.N.G.E.R.S._Initiative_(Earth-15061)?oldid=5341215"
Community content is available under CC-BY-SA unless otherwise noted.