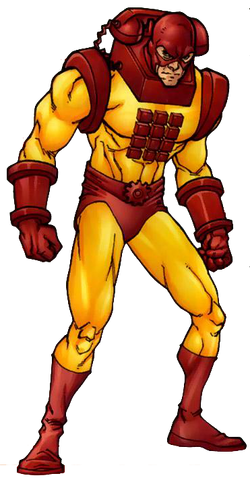 The Phone Ranger was a would-be hero. A.G. Bell was a telephone repairman who was sent to fix a phone that, unknown to anyone, was actually acting as a prison for a small race of aliens known as the Seltas. The Seltas had left the day before, accidentally freed when the phone was broken but Bell found the Selta's technology in the phone. Replicating it in his home, Bell found it could be used to tap into any communications technology. He decided to use it to fight crime as a superhero: the Phone Ranger. However, in one of his first adventures, he was a victim of the Scourge of the Underworld. [3] Miraculously, that headgear deflected the bullet and saved his life. [2]

During the Civil War, he was arrested by Iron Man, Spider-Man and the NYPD, alongside Lectronn, Lightbright and Wildstreak.[4] After Captain America surrendered, he accepted the offered super-hero amnesty.

Bell is skilled at repairing and innovating upon analog and digital telephone technology.

Like this? Let us know!
Retrieved from "https://marvel.fandom.com/wiki/A._G._Bell_(Earth-616)?oldid=6105615"
Community content is available under CC-BY-SA unless otherwise noted.