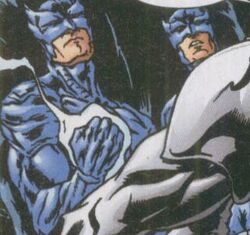 AC-DC were conjoined twins who were transformed by the reality-bending Jasper's Warp which engulfed the U.K. several years ago. [1]

Like other "Warpies", they were tracked down by government agency R.C.X. (the Resources Control Executive). Supposedly this was for their own safety, but in truth R.C.X. head Nigel Orpington-Smythe intended for them to be trained to become a superhuman army. They became part of the Cherubim, the first combat ready squad the agency trained. [1]

Fearing for the safety of their charges if the plans of their superior Nigel Orpington-Smythe went ahead, several R.C.X. agents, led by Agents Michael and Gabriel, spirited the children away from the agency. They took them to Braddock Manor to enlist the aid of Captain Britain (Brian Braddock), figuring that he could lend them much needed protection, both physical and politically. However, the agents' decision to not fully inform the hero of their situation meant he was reluctant to help, and while they argued, the Cherubim were released from the van they were being transported in by Meggan, a young empathic meta-morph staying at the Manor. They fought Captain Britain and his allies, Betsy Braddock and Captain UK, but were swiftly overpowered. [2]

In the confusion afterwards, the Cherubim, including AC-DC, went AWOL; the other Warpies moved into Braddock Manor. The Cherubim ended up in London, where they briefly fell under the influence of the Fagin-like Uncle Lex, and joined his Parasites (a Warpie gang). Later R.C.X. tracked them down and brought them back into the fold. Working for Orpington-Smythe, AC-DC and their friends fought Captain Britain and Meggan again, and captured them. Orpington-Smythe was later deposed as head of R.C.X., and control of the agency fell to Michael and Gabriel, and their ally from the Weird Happenings Organization Alistaire Stuart.[3]

This new era was sadly short-lived; the ruthless Black Air agency kidnapped the Warpies and ran experiments on them, dissecting many. AC-DC was among the survivors subsequently rescued by Mastermind, the computer intelligence from Braddock Manor who had once looked after many of the Warpies. Mastermind saved them, but because his programming had been corrupted by Kang the Conqueror, he turned them into an army which he led into battle against Otherworld. Captain Britain led a team of heroes to save the realm, and eventually used the power of the Sword of Might to transform the Warpies, AC-DC included, back into normal humans.[4]

Currently none, all of the Warpies were depowered by Captain Britain on Otherworld using the Sword of Might. [5]

Like this? Let us know!
Retrieved from "https://marvel.fandom.com/wiki/AC-DC_(Earth-616)?oldid=5245139"
Community content is available under CC-BY-SA unless otherwise noted.