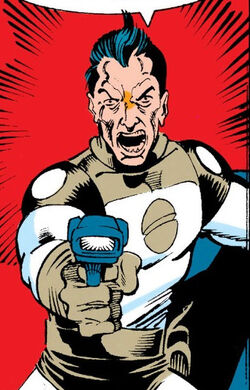 Aa-Gorn was a pink skinned Kree soldier that proposed killing Clumsy Foulup in his sleep. He was slain when attempting to destroy the Silver Surfer construct used by Ael-Dan and/or Dar-Benn. [1]

Outwardly humanoid to a large degree, Aa-Gorn's Kree body is adapted to environmental characteristics on Hala that are un-Earthlike: notably, higher gravity and a higher nitrogen content in the atmosphere. Although Kree cannot breathe Earth's atmosphere without special apparatus, his denser body afford him about twice the average human being's strength and endurance.

Like this? Let us know!
Retrieved from "https://marvel.fandom.com/wiki/Aa-Gorn_(Earth-616)?oldid=4275885"
Community content is available under CC-BY-SA unless otherwise noted.