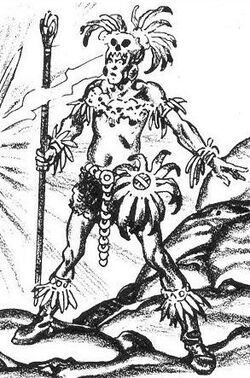 Aa-Thak was a sorcerer who aspired to become the most powerful shaman of the Pict clans. During a conclave between the Pict tribes of Tathel, Aa-Thak challenged fellow shaman, Gonar. Before their magical fight would have a conclusion, they were interrupted by a raid from Atlanteans and the Picts went to confront their enemies. An Atlantean war band attacked the village to kidnap Dinaldo, a Valusian emissary, and Aa-Thak summoned Jaggta-Noga, demon-lord of the Lost Land, slaughtering almost all the Atlanteans. Gonar's powers had let him learn that one of the Atlanteans would be a important man for the future of Picts and Valusians so he intervened. With his staff, Gonar wounded Aa-Thak and then banished the demon back to his dark realm before he could kill the Atlantean survivor. This survivor would later in the future become Kull, King of Valusia.[2]

Like this? Let us know!
Retrieved from "https://marvel.fandom.com/wiki/Aa-Thak_(Earth-616)?oldid=5150882"
Community content is available under CC-BY-SA unless otherwise noted.