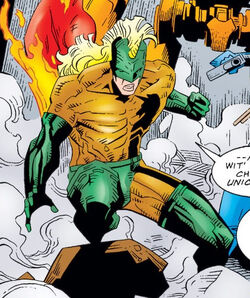 Aaidan Blomfield was the third man to call himself the Unicorn. He was an agent of Stockpile attempting to raid Stark Enterprises for Morgan Stark after the apparent death of Tony Stark. He claimed to be an old foe of Iron Man's, but it is unknown if he really was, or was just riding on the reputation of the original Unicorn.[1]

Like this? Let us know!
Retrieved from "https://marvel.fandom.com/wiki/Aaidan_Blomfield_(Earth-616)?oldid=6429510"
Community content is available under CC-BY-SA unless otherwise noted.