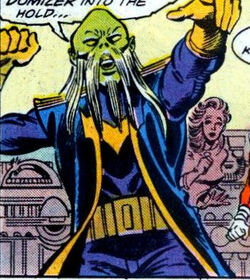 Aalbort was accountant for the starship Principle of Reasonable Interest and had been working for 150 years when somebody snuck a Dimensional Randomizer into the hold by listing it as "Robot Parts." The randomizer activated during an explosion opening a portal to another dimension. which allowed the warlord Azunbulxibar and his troops through to this dimension. Aalbort help defend the ship alongside the only other survivor, the ship's captain. The captain temporarily trapped the invading force when Starfox and Heater Delight discovered Aalbort. Eros asked Aalbort to lower the shield so he could talk to Azunbulxibar, which he reluctantly did. Eros was successful in duping the bellicose Azunbulxibar and his troops into returning to their own dimension. [1]

Aalbort is an accomplished trader and accountant. He has some experience with use of ship weapons, such as an anti-matter gun. He may have some training in starship navigation as well.

Like this? Let us know!
Retrieved from "https://marvel.fandom.com/wiki/Aalbort_(Earth-616)?oldid=4857409"
Community content is available under CC-BY-SA unless otherwise noted.