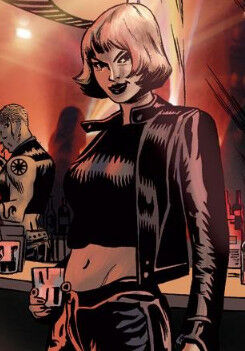 Aamshed was Sumerian sorceress who was forced by Varnae to create the Ritual of Ascendance, but then used it against him. After this, she entered a hibernation-like state for two millennia in order to power-up and fight the vampire lords that were emerging. She used sorcery to gather the souls of the vampires' victims and eventually took the alias Divinity Drake.[1]

She joined Noah van Helsing's vampire hunters and faced Dracula himself. Dracula thought he was controlling her, but she used this knowledge to have all the souls she gathered to kill him and his legions.[2]

Aamshed is a master sorceress, able to create powerful spells and talismans, slow her aging to survive for millennia, and create a false identity for herself that submerges her true identity and memories to the point that she is unaware of them.[3] The full range of her abilities is not revealed.

As Divinity Drake, she was a world-class biochemist and vampirologist, as well as an expert in bio-weaponry and gene manipulation, and a three-time hap-ki-do champion.[4]

Like this? Let us know!
Retrieved from "https://marvel.fandom.com/wiki/Aamshed_(Earth-616)?oldid=6131318"
Community content is available under CC-BY-SA unless otherwise noted.