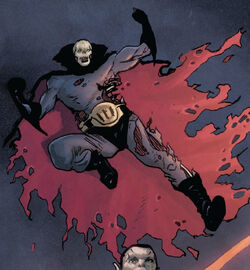 Presumably, before his infection with the zombie virus, Aarkus' life mirrored that of his counterpart on Earth-616. After he and the other Invaders were transformed into zombies, however, they became a powerful shock troop for the Nazis. The Invaders confronted the Ducky Dozen shortly after that group arrived on Earth-12591.[1] Before the Vision could really attack anyone, however, he was ripped in two by Dynaman.[2]

Seemingly those of Aarkus of Earth-616.

Like this? Let us know!
Retrieved from "https://marvel.fandom.com/wiki/Aarkus_(Earth-12591)?oldid=6466715"
Community content is available under CC-BY-SA unless otherwise noted.