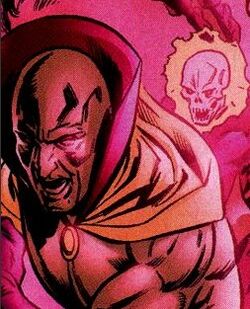 The past history of Aarkus on Earth-9997 mirrors that of his Earth-616 counterpart.

Since his death he has remained in the Realm of the Dead, fighting pointless battles against the resident super-beings that have also died. It was not revealed if Aarkus went to Mar-Vell's Paradise after the death of Death.

Seemingly those of Aarkus of Earth-616.

Like this? Let us know!
Retrieved from "https://marvel.fandom.com/wiki/Aarkus_(Earth-9997)?oldid=6129717"
Community content is available under CC-BY-SA unless otherwise noted.