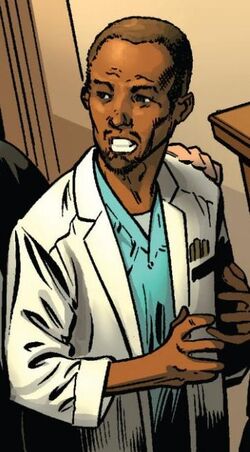 Dr. Aaron Carpenter was the world's greatest living brain surgeon. He knew Bruce Banner from high school, whom he saw as an "insufferable geek."

After Bruce Banner was shot in the head, Carpenter was contacted by the Ancient Order of the Shield,[1] disguised as S.H.I.E.L.D., the ones who secretly had Banner shot, and was brought in to operate on him. During the surgery, Carpenter was ordered to place a device capable of controlling the Hulk's transformations in Banner's brain. Aaron hesitated, and thought of killing Banner to prevent the agency from controlling Hulk, in order to save lives.

However, Banner was awakened by the anesthetist, whose life had been saved by the Hulk decades ago, triggering his transformation into the Hulk. The agency released a gas in the operating room in order to eliminate the witnesses of their actions, but the Hulk managed to break a wall and allow the gas to scatter, saving the life of Carpenter and the other participants of the surgery.[2]

When Bruce Banner was recovered by the Avengers, Iron Man recruited Carpenter to perform a new surgery on Banner's brain, this time using Extremis in order to fix it.[3]

Like this? Let us know!
Retrieved from "https://marvel.fandom.com/wiki/Aaron_Carpenter_(Earth-616)?oldid=4931619"
Community content is available under CC-BY-SA unless otherwise noted.