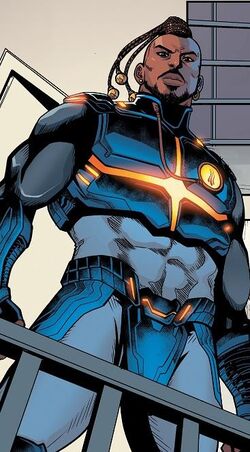 In 1966 during the Vietnam War, an American recon patrol in Cambodia stumbled upon the ancient, hidden temple of a cult known as the Dragon's Breath, which had remained hidden for centuries. It had been built upon a well-spring of raw, primal energy called the "Well of All Things". The inhabitants decided to breed a superior race that would one day unite with the ways of the west. They believed that this union would produce children capable of harnessing the power of the Well. The members of the recon patrol were to be the fathers of these children, one of these men was Andrew Chord; the man who would become Midnight Fire's father.[1]

Midnight's Fire and his sister Silhouette were the only children of Andrew Chord, former guardian of Dwayne Taylor and his wife Miyami (daughter of Tai). Silhouette and Midnight's Fire were operating as independent vigilantes in the streets of New York City when they met Dwayne, before he became the vigilante Night Thrasher. The three began an organized effort to take down various New York City street gangs.[2][3]

Their partnership ended when Silhouette was shot and paralyzed from the legs down in a sting gone bad. Midnight's Fire blamed Dwayne and became a cop killer and a drug lord in order to lure Dwayne into a physical confrontation he could not possibly win. Later, the partially paralyzed Silhouette reunited with Dwayne, distancing herself from her brother's evil actions.[2]

Diego Cassias, one of the other members of the recon patrol now calling himself the Left Hand, stole the power of the Well from his own child, then gathered the other children of the pact including Midnight's Fire into a group called the Folding Circle.[4] The Circle attempted to take control of the Well away from Tai. Members of the Circle, together with the New Warriors, managed to defeat Tai, but the Well was sealed. Cassias and Tai were apparently killed, and the surviving members of the Circle escaped in a stolen Avenger's Quinjet.[5]

The remaining members of the Folding Circle later crashed in Madripoor and attempted to usurp the role of a local drug lord, which was then held by Aardwolf, a mutant crime lord. They succeeded, but were later taken down by Night Thrasher and Silhouette.[6]

Shortly after the superhuman Civil War, Midnight's Fire aligned himself with a mysterious benefactor. He was called in to have a face to face meeting with the new Night Thrasher, (whom he still believed was the now deceased Dwayne Taylor, but was is in fact Donyell Taylor) for the purposes of arranging an 'alliance'.[7] Midnight's Fire agreed to steal magic items such as Diablo's Book of Shades and the Ka Stone. Aaron warned Donyell against using mysticism, but Donyell ignored his warnings to build a time machine.[8]

Midnight's Fire began working with a terrorist organization called the Ten Rings. He acted as one of their enforcers as part of a plot to circumvent the youths of Chicago into petty thieves. He kept an eye on Daija Hamilton after she returned home due to the involvement of Ironheart's investigation into Daija's disappearance. Chord followed Ironheart after she left Daija's bedroom.

His position became compromised when Ironheart picked up his heat signature on her thermal scanner. A fight broke out between the two with Midnight's Fire gaining the upper hand as he threw Ironheart through a building's window. Ironheart fired her repulsor beam at Chord but he managed to dodge it but he left behind his fingerprints which allowed Riri to run a I.D. scan to learn his identity, powers, and history. Chord then took Riri by surprise and grabbed her by the neck and used his extrasensory abilities to let Ironheart dwell into hers fears which she experienced it as her being choked by the Mad Titan Thanos. Riri was able to snap out of the trance and headbutted Chord in the face and then fired another beam which launched him into a pile of crates. He lunged forward at her but she blasted him with enough power to knock him unconscious. She left Chord behind since someone called authorities but when they arrived Midnight's Fire was no where to be found.[9]

Later on, Chord visited Riri at her home while she ran a simulation involving him. Chord explained to her about his past and gaining his abilities through the Wellspring of Power. He told her that his ambitions lined up with the Ten Rings prerogative, and hoped that Riri would join them as his crowned heir. She refused his offer and suited up quick enough to fight him, but he dodged her attacks and then used a hypnotic effect to put her asleep.[10]

Midnight's Fire showed up at an abandoned warehouse when Daija and Ironheart faced off against Councilman Thomas Birch who led the children into stealing in order to get himself elected governor. Chord told Riri that she had been given too many chances and mentioned that the Councilman was nothing more than a pawn in the grander scheme of the Ten Rings. Chord leaped into battle against Ironheart again due to her rejecting his offer. Riri tried to keep Chord busy while Daija helped the children escape through a tunnel. Chord dodged every single concussive blast that Riri fired and then he turned around in midair grabbing her but she electrocuted him through his armor knocking him out on the ground. She then tied him up until the police arrived on the scene and showed them images of Chord and the dealings of the Ten Rings which led to his arrest.[11]

Midnight's Fire has very subtle abilities, due to the energies of the Well of All Things. His physical attributes are at the peak of human possibility. He has enhanced speed, strength, agility, and sensory perception on par with Black Panther.

Aaron Chord is also an unparalleled martial artist. The combination of these traits made him a deadly threat in combat to normal humans like Night Thrasher. The threat of a physical confrontation with Midnight's Fire was one of the main reasons that Dwayne Taylor created his body armor.

Like this? Let us know!
Retrieved from "https://marvel.fandom.com/wiki/Aaron_Chord_(Earth-616)?oldid=6118557"
Community content is available under CC-BY-SA unless otherwise noted.