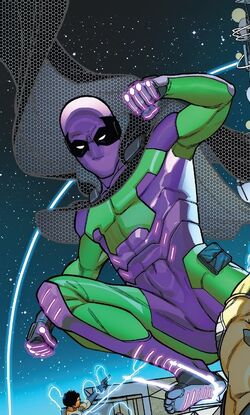 Aaron Davis was a burglar and career criminal. His brother used to be his partner in crime. Whereas his brother reformed when he became a father, Aaron continued his criminal activities as the Prowler and became estranged from his brother. While stealing technology from Osborn Industries under orders from Roxxon, a spider genetically enhanced with the Oz formula crawled into his bag and later bit Miles Morales, granting his nephew powers and turning him into the new Spider-Man.[4]

While Davis was in Mexico settling accounts with the Scorpion, he was imprisoned.[5] He escaped and went to the Tinkerer's hideout to blame him for the equipment he made. When both talked about Peter Parker's origin as Spider-Man, Aaron realized the spider that bit Miles in his house was from Osborn Industries, and that Miles was the new Spider-Man. To keep it a secret, Davis shot Tinkerer and went to visit Miles.[6]

Using Miles' secret, he blackmailed his own nephew into helping him defeat Scorpion. After Scorpion was defeated by the joined forces of Spider-Man and Prowler, he tried to force Miles to continue working for him.[7] Miles made an ultimatum where his uncle was to stay away from his family and to leave New York City forever, Davis decided to use his vibro-shock gauntlets to eliminate Miles. At the climax of the battle, one of Aaron's damaged vibro-shock gauntlets exploded. The blast left Aaron severely injured. Before losing consciousness, Aaron cryptically told Miles that he was very much like him as Miles could only look on in horror at his uncle's state. Davis was reported to have died from his injuries the following day.[8]

Following the destruction and rebirth of the Multiverse, Miles found himself stranded in a different reality than his own, with all of his life having being transplanted to this reality.[9] It is possible that also resulted in Aaron's return, who suddenly found himself alive, in his own words, waking up in a bed like his death had never happened.[10]

Returning to criminal activities, Aaron bought an Iron Spider Armor off the black market and reformed the Sinister Six by recruiting Hobgoblin, Sandman, Electro, Bombshell, and the Spot, with the intention to steal a decommissioned S.H.I.E.L.D. Helicarrier.[1] Miles stumbled into Aaron's plan when Bombshell tried to force her daughter Lana, one of Miles' friends, into becoming part of the team. After Miles unmasked Iron Spider and was shocked to learn his uncle was alive again, Aaron knocked him out,[11] took him to his apartment, and warned him not to get in his way.[10]

The Sinister Six carried out the heist, and Miles attempted to stop them despite Aaron's request. He failed, and the Sinister Six took off aboard the Helicarrier, and cloaked it.[12] He returned to Aaron's apartment and searched for clues, leading him to assemble the Champions and intercept the Sinister Six's meeting with their buyer, Lucia von Bardas, in Latveria. In the middle of the fight, Miles attempted to reason with Aaron and convince him that he could be better.[13] The battle came to an abrupt end after Latverian soldiers forced them over the edge, resulting in Iron Spider's apparent fall to his death.

Many weeks later, Aaron turned out to be alive, and he visited Miles when he was recovering from a viral infection. Aaron told Miles that he was right about being able to do better, seemingly indicating that he had given up his life of crime.[14][15] He sold the Iron Spider Armor back to its creator, Tony Stark, and used the money to support himself. Crimelord Tombstone tried to tempt Aaron into becoming a criminal again, but Aaron declined to join the Tombstone Squad.[15]

When Miles was kidnapped, Aaron was able to find him, but was unable to rescue him by himself. He first visited his estranged brother to ask for his help and then they visited Ceres Goldstein, an arm dealer, to obtain a new Prowler suit. Since Aaron could not longer afford her services due to going straight, he agreed to work for her to pay off his debt. The Davis brothers then broke into the complex Miles was being held in, but were stopped by Asset Quantum. Luckily, Assessor had finished his assessment of Miles and allowed the three of them to escape. Afterwards, Jefferson thanked him for his help and asked him to come to dinner, beginning the process of mending their relationship.[16]

After Aaron failed to commit an assassination, due to Miles not wanting his uncle to return to crime, a bounty was set for him by his boss.[17] After he and Miles were successful in fending off the criminals trying to claim the bounty, Ceres was able to convince Prowler's boss, Ultimatum, to spare Prowler, on the condition for his full servitude. Afterwards, he and Miles arrived at the hospital where Rio gave birth to Billie.[18]

After Prowler delivered a chemical to his boss, Ultimatum explained to Aaron the nature of the Multiverse, while also revealing that Aaron had a life in the other universe, which he had forgotten. Afterwards, Ultimatum knocked Aaron out in order to use him as part of his plan regarding the young Spider-Man.[19]

Master Thief: Aaron is a highly skilled thief, and is skilled in stealth, picking locks, escapology, evading alarms and cracking safes. He has been described as the most dangerous thief in America.[6]

Olympic Level Athlete: He has reflexes, agility, and stamina of an Olympic level acrobat. He is physically very strong and athletic and has great physical endurance.[citation needed]

Expert Acrobat: Aaron is particularly a skilled acrobat and capable of many difficult feats.[citation needed]

Expert Marksman: He is expert marksman, easily shooting many henchmen without aiming.[citation needed]

Aaron possesses the normal human strength of a man of his age, height, and build who engages in intense regular exercise and is considered athletic.[citation needed]

Without his equipment, Aaron is a normal human and is as susceptible to physical injury and disease as any other normal human.[citation needed]

Like this? Let us know!
Retrieved from "https://marvel.fandom.com/wiki/Aaron_Davis_(Earth-1610)?oldid=6129677"
Community content is available under CC-BY-SA unless otherwise noted.