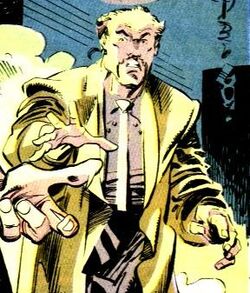 Aaron Delgado was Miguel O'Hara's immediate superior on the Corporate Raider program. However, O'Hara had little regard for Delgado's rules or intelligence. When Delgado caught Miguel using the equipment on himself after hours (in an attempt to cleanse his body of the genetically-bonding Rapture drug), Aaron tampered with the equipment to try and kill Miguel. Instead, Miguel was mutated by a spider genetic imprint to have the proportionate abilities of a spider.[1]

Delgado freaked out when he saw how Miguel had changed, and started firing a gun, causing an explosion. Aaron was dangling over the side of building when Miguel tried to pull him back up. Miguel didn't know about his talons yet, and accidentally began digging into Aaron's flesh. Delgado squirmed out of Miguel's grasp and apparently plunged to his death.[2]

Like this? Let us know!
Retrieved from "https://marvel.fandom.com/wiki/Aaron_Delgato_(Earth-928)?oldid=5213533"
Community content is available under CC-BY-SA unless otherwise noted.