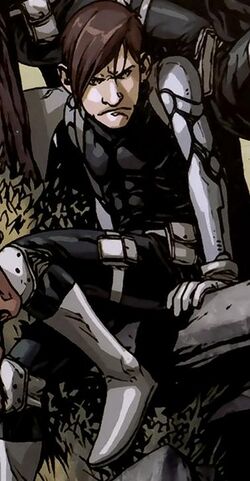 Aaron Downing is one of the superpowered member of the Secret Warriors team formed by Nick Fury. He uses shadow machine technology, letting him create and control energy constructs. He was serving time on the Raft and was freed by Nick Fury and given a reduced sentence if he joined the team. He is listed as an untapped superhuman which he could use in his secret war against Hydra and Leviathan. He was assigned to Team Black, where all of the more problematic Caterpillars were sent, which was led by Alexander Pierce.[1]

Last Ride of the Howling Commandos

Team Black was deployed to take part in a joint attack on Hydra's Hell's Heaven base in China along with the Howling Commandos PMC.[2] The mission was successful with Team Black taking point on the infiltration of the base, allowing for a bomb to be detonated destroying the base.[3] With their mission complete, Team Black made their own separate exit, not realizing that the Commandos would suffer a devastating battle against Hydra forces after they left.[4]

Having won his secret war against Hydra and Leviathan, Nick Fury pulled together all of the surviving members of the Secret Warriors and Howling Commandos together into a new organization sponsored by the United Nations. Team Black, now served in this organization under the overall command of Quake.[5]

Aaron Downing received the same training in espionage and combat as other members of the Secret Warriors.

Like this? Let us know!
Retrieved from "https://marvel.fandom.com/wiki/Aaron_Downing_(Earth-616)?oldid=5486640"
Community content is available under CC-BY-SA unless otherwise noted.