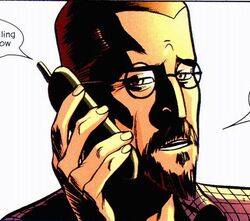 Dr. Aaron Isaacs was a pioneer in the field of robotics, created the "Autonomously Decisive Automated Mechanism". But when he discovered his employer Holden Radcliffe had destroyed his work, Isaacs went on the run. He changed his name to Isaac Aaronson and built Adam, a beta version of his A.I. project. Adam was programmed with false memories of a normal childhood and deceased mother.

However Adam was injured but reprogrammed so he doesn't remember the seizure to his dad, his dad shrugs it off and says not to worry.[1] Adam awoke on the operating table and overhears his father talking and deciding not to wipe his memory this time. Adam then woke up in his bed, and thinks it was all a dream. This is the point were he confronts his father that he is a robot and that all of his memories have been fake. He initially believed that his father was lying to him, and says his memories, specifically about him falling off his bike when he was younger and being with his mother when she died, could not be fake. Dr. Aaronson shows his son his blueprints, showing Adam that he was not lying. Confronted with this information, Adam becomes enraged and runs away. Michaels captures him and attacks Adam. After being shot but escaping, Adam went to J.T.'s home, but collapsed. J.T. dragged Adam in and reset Adam to blank his memory, revealing J.T. knew Adam is a robot. Adam was surprised J.T. knew about his true origins.[2]

J.T. revealed that before Adam was born, J.T. worked for Aaronson as a lab assistant. He came across Adam's robotic body, and since then was forced to keep the truth about Adam a secret. J.T. revealed an external hard-drive that Aaronson had previously hid, which he thought might help Adam understand his situation. Adam plugged into the hard drive, but is then attacked by another group of agents. J.T. shocked the agent with a taser that Aaronson had made and they escaped. J.T told him he wasn't sure the taser would work on a real person, accidentally offending Adam. He apologized and said that Adam was not programmed to be his friend and that he is human as he has free will. Adam called Carly and has them meet them near the school. Carly unknowingly helped Holden Radcliffe capture Adam, leading Office Michaels to Adam and J.T. and they are all captured.[5]

Adam and his friends were brought to a building where Dr. Isaacs is kept. Adam was taken away and strapped to a table, where Holden Radcliffe tries to hack into Adam and take control of him; however, they could not. Adam escaped from Holden Radcliffe's, along with his father and friends, by tricking them in to thinking he is under their control. During the escape, Adam is nearly destroyed and has to delay Radcliffe to let his father and friends escape. Dr. Aaronson escapes with Adam's computer core, which set off a self-destruct sequence. Adam exploded, and Holden Radcliffe and Michaels are killed in the explosion. One year later, Adam was rebuilt, entering a new high school, Edison High School, and started a new life.[6]

Like this? Let us know!
Retrieved from "https://marvel.fandom.com/wiki/Aaron_Isaacs_(Earth-616)?oldid=4295443"
Community content is available under CC-BY-SA unless otherwise noted.