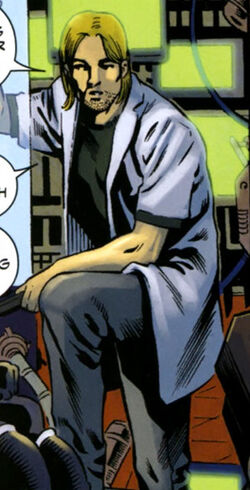 Dr. Aaron MacKenzie was a Lieutenant in the U.S. Army who worked as a top scientist on Project Rebirth 2.0, which created Agent Venom, the union between Corporal Flash Thompson and the Venom Symbiote. MacKenzie also developed a Multi-Gun for Thompson.[1]

Aaron acted as support for Thompson until Flash went AWOL.[2]

Like this? Let us know!
Retrieved from "https://marvel.fandom.com/wiki/Aaron_MacKenzie_(Earth-616)?oldid=5195421"
Community content is available under CC-BY-SA unless otherwise noted.