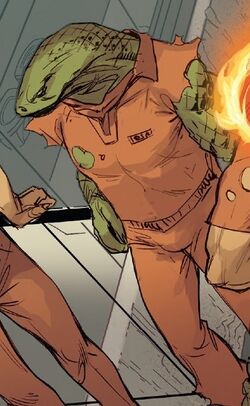 Aaron Salomon is a mutant with elastic powers and a snake-like appearance. He was recruited, alongside four other mutant men (Burner, Lifter, Peepers, and Shocker), to serve in Magneto's new Brotherhood of Evil Mutants. Wanting to exploit a tiny spaceship he had found, Magneto sent the Brotherhood to apprehend the diminutive Mister One, who controlled the larger Mister Two. The villains attacked One and Two and Captain America in a park. When S.H.I.E.L.D. arrived the Brotherhood fled back to their headquarters and Magneto captured Mister One. The Brotherhood was shocked to learn the plot involved the tiny spaceship. When Mister One exploded the tiny spaceship, the villains were forced to flee. [1]

After being abandoned by Magneto the five mutants were hired by the Mandrill and became the Mutant Force. They attacked a Colorado Air-Force base with Mandrill's Fem-Force. When the Defenders got involved, things got out of hand and Mutant Force was defeated. [2]

The Mutant Force, still in custody, was brought before a special United States Intelligence Services branch. They agreed to become special government operatives in exchange for full presidential pardons. After the Hulk invaded a baseball stadium, Mutant Force was sent in with the army to stop him, and the stadium was evacuated. During the battle Valkyrie and Hellcat attacked, and Valkyrie knocked a structure down on the mutants, allowing the Hulk to escape.[3]

Mutant Force was called to testify against the Defenders in what they thought was a government inquisition but was actually the alien Tribunal. Lifter testified about their recent battle with the Defenders. [3]

No longer working for the government, the Mutant Force, minus Peepers, was recruited by the Secret Empire alongside several other operatives. Mad-Dog was put in charge, and they were sent in to attack the Defenders at the wedding of Hellcat and the Son of Satan in Greentown, Ohio. The villains were quickly defeated.[4]

The villains were held in S.H.I.E.L.D. null-fields for questioning. Professor Power arranged for their release while Leviathan created a distraction.[5] Mad Dog and the Mutant Force fought off the attacking Defenders while the Secret Empire launched a satellite that would start a world war.[6] The satellite exploded, and the Defenders quickly defeated the villains.[7]

Salomon joined up with the Viper, an international terrorist and murderer, and began to act as her lackey. His intelligence seemed to have decreased. He followed her plan to infiltrate the Serpent Society and release a toxin into the water that would turn much of America's population into human snakes. Salomon, with Viper, Coachwhip, and Puff Adder, helped interrogate the villainous members of the Serpent Society to coax them into joining Viper's group. Black Mamba, the Asp, Diamondback, Bushmaster, and Sidewinder refused to join with Viper, but the rest of the villains did.[8]

When Captain America, Diamondback, and Nomad attacked Salomon was knocked out by Nomad. He was taken captive aboard the heroes' ship. Nomad brutally interrogated Salomon. The heroes landed the ship and ran out, leaving Salomon tied up aboard.[9]

As part of Viper's group, the Fangs (along with Bludgeon, Heat-Ray, and Razorblade) Salomon assisted Viper in her latest nihilistic plot to blind every American who owned a TV set. When Viper was captured she was tortured by the Red Skull's agent the Iron Monger, who broke Viper's leg. The Fangs, armed with guns and jet-packs, rescued Viper. Back at the base, Captain America, Battlestar, and Silver Sable attacked. Sable stabbed Saloman with several weapons and left him moaning in pain. The heroes successfully stopped the plot.[10]

Back with the Mutant Force again, Salomon attacked an armored truck for money, attracting the attention of the New Warriors. Speedball bounced an unconscious Salomon into the open truck. All the villains were quickly defeated.[11]

Following the events of House of M, Slither retained his mutant powers and was later seen as a member of the latest incarnations of Mutant Force.[12]

Slither later rejoined the Serpent Society at the time when the group was recruited to join Baron Helmut Zemo's Army of Evil.[13]

Serpent Physiology: Slither greatly resembles a large snake with arms and legs, and has scaled skin.

Like this? Let us know!
Retrieved from "https://marvel.fandom.com/wiki/Aaron_Salomon_(Earth-616)?oldid=6463758"
Community content is available under CC-BY-SA unless otherwise noted.