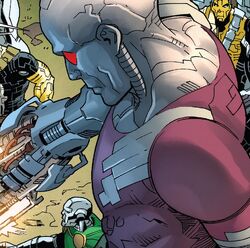 Machine Man's history is presumably similar to his Earth-616 counterpart's.

When intelligent zombies called the Respawned invaded Earth, a S.H.I.E.L.D./A.I.M. coalition assembled a team of robots called the Ennows to fight the zombies as machines couldn't be zombified. Machine Man was one of the robots. However, after the population of humans fell to almost nothing, the Ennows were left to their own devices and and began fighting for themselves against the zombies.

When a group of human survivors were attacked by a horde of Respawned, the Ennows, including Machine Man, fought them off. A fight almost broke out between the survivors and the Ennows, but it was quickly broken up. The survivors were then taken into Ennow custody with Machine Man ordering them taken to the holding bays. The Ennows planned to turn the survivors into machines through exposure to the Transmode Virus. However, the process was interrupted by a group of zombies consisting of superhumans with superhuman strength that were able to break through the Ennows' home, the Phalanx Wall. Machine Man was ripped to pieces by the zombies.[1]

Seemingly those of the Aaron Stack of Earth-616.

Like this? Let us know!
Retrieved from "https://marvel.fandom.com/wiki/Aaron_Stack_(Earth-19121)?oldid=6466731"
Community content is available under CC-BY-SA unless otherwise noted.