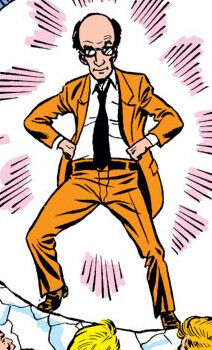 A bank teller fascinated by geometry, Aaron Verne spent his life fascinated by the study of shapes but lacked the money to attend college. Working various small jobs, he eventually ended up as a bank teller. This job didn't last long as he was fired for daydreaming. Going home after his release, he began daydreaming about geometry once again, only this time, the shapes he imagined became real.[1]

Returning to the bank he was formerly employed at, he broke through a wall using a cylindrical battering ram, then herded the patrons and employees into a corner of the room and constructed a prison using his geometry powers. Unknown to him, Donald Blake was among the prisoners. Sneaking into a back room, Blake transformed into Thor, and as Verne left the bank, he confronted the man. Calling himself Locus he struck out at Thor. As the battle increased, Locus managed to encase Thor's hammer in an energy construct, keeping it from Thor almost long enough to force Thor's reversion to Blake. After Thor reacquired his hammer, Locus abducted a woman, putting her inside of a sphere, threatening to drop her if Thor didn't set down his hammer. Locus then created a platform beneath the hammer to bring it to him. As he grasped it, and let the platform fade, it took him by surprise, dragging him to the pavement below. As Thor went to save the girl Locus hit the pavement. After flying away, Thor briefly returned as Donald Blake to check on Locus. An ambulance arrived, which took Locus away. [1]

Locus felt tremendous pain when the constructs he formed were hit, similar to the Invisible Girl's early limitations with her force fields.

Like this? Let us know!
Retrieved from "https://marvel.fandom.com/wiki/Aaron_Verne_(Earth-616)?oldid=5213544"
Community content is available under CC-BY-SA unless otherwise noted.