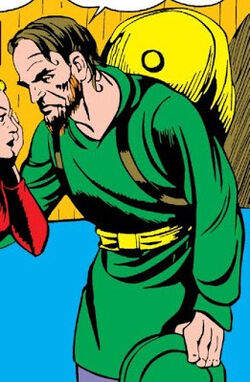 A mountaineer, Ab lived on Hollow Bluff with his wife Ella. The supernatural location drew the Legion of the Doomed, who forced the Waltins to take in one of their agents -- mystically disguised as a newborn human -- as their child as a cover for its serial murders. Fearful for their lives, Ab did his best to dissuade the curious, but was nevertheless murdered by the Legionnaires when the Fiery Mask uncovered the truth. His murder was reported in the newspaper following the Fiery Mask's showdown with the demons.[1]

Like this? Let us know!
Retrieved from "https://marvel.fandom.com/wiki/Ab_Waltin_(Earth-616)?oldid=4879554"
Community content is available under CC-BY-SA unless otherwise noted.