It is possible that the Demon Abadon and the fallen angel Abbadona are the same beings.
Abadon 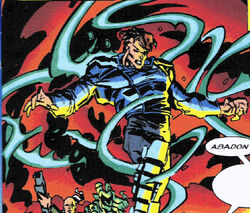 Abadon was an extradimensional entity enslaved and given human form by Mephisto and Mys-Tech. He was seemingly rescued by the Shadow Riders, but this was revealed as trap set by Porlock. He attacked the Shadow Riders due to Porlock's post-hypnotic programming. [1]

Abadon is capable of manipulating energy for a variety of effects, including destructive energy blasts, forming impenetrable bonds, and other abilities.

Like this? Let us know!
Retrieved from "https://marvel.fandom.com/wiki/Abadon_(Earth-616)?oldid=5439043"
Community content is available under CC-BY-SA unless otherwise noted.