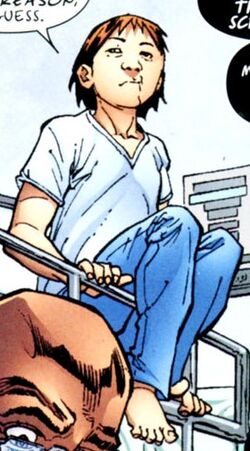 Aban, the son of the immortal Zahhak, was rescued by Terror from an Istanbul base, thinking that Dr. Jean-Marc LeFēvre was experimenting on him, but when Terror brought the boy to a hospital, everyone present began to die from the plague. He was defeated and captured by Terror with the help of Alexis Primo and the Mujahedeen Mahboobullah Karzahellian. Aban and his father Zahhak were both trapped in the Zagros mountains' cave, where Zahhak's snakes try to consume Aban's brains each day before Aban's plague kills them. [1]

Aban is an immortal plague carrier.

Like this? Let us know!
Retrieved from "https://marvel.fandom.com/wiki/Aban_(Earth-616)?oldid=4295456"
Community content is available under CC-BY-SA unless otherwise noted.