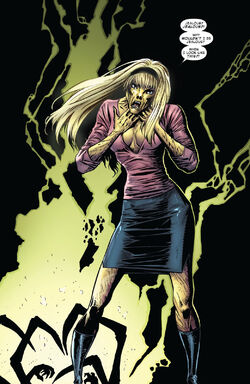 Abby-L was the first successful attempt by Miles Warren at cloning a human being. As she believed clones were nothing more than hollow husks that shouldn't exist, Abby-L made Warren agree to never make another clone of Gwen Stacy again, and she would never bother him again. She then left to somewhere unknown.

Years later, Abby-L had the idea that the Jackal was up to something planted on her mind by the Queen, who wanted to use her so that she could test the Jackal. Upon learning of the existence of another Gwen Stacy clone, Abby-L killed her and tracked the Jackal back to his old laboratory underneath the Shea Stadium.

The Jackal returned with Kaine, who was passing through a secondary mutation after being killed by the Kravinoff Family, and mutated him into a spider-like monster he called Tarantula while Abby-L watched everything from the shadows. When Abby-L made her presence known to them, the Jackal ordered Tarantula to kill her, but the Carrion Virus inside of her allowed her to reduce him to a withered husk, and he was believed to be dead. She tried to kill the Jackal as well, but their battle damaged the laboratory, causing both to be crushed by a machine.

It turned out that thanks to his regenerating cells, Tarantula was not dead and returned stronger than before. Abby-L, who was still conscious, tried to convince him to save her and leave the Jackal to die. However, Kaine chose to save the Jackal, and she died in the explosion that followed shortly after at the lab.[1]

The Carrion Virus in her veins enables her to kill anyone with her touch.

Abby-L used a sniper rifle to kill the other clone of Gwen Stacy.

Like this? Let us know!
Retrieved from "https://marvel.fandom.com/wiki/Abby-L_(Earth-616)?oldid=6466735"
Community content is available under CC-BY-SA unless otherwise noted.