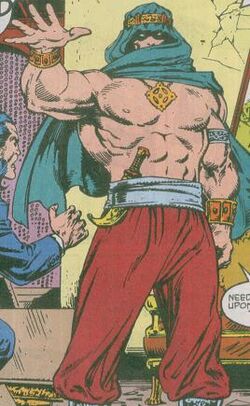 Abdul Alhazred was born in the 8th century in Saudi Arabia.[1][6]

The same century,[7] he created the legendary Necronomicon, a powerful black magic tome patterned after the Darkhold,[1] or inspired by it,[8] though it was theorized that the Darkhold, like the Necronomicon, the Oracles of Zoroaster, and other mystic scrolls and books, was in fact simply a collection of imperfect copies of the ancient writings etched on the walls of R'llyeh by ancient beings.[9]

While trying to take over Tyger Tiger's syndicate in Madripoor, Abdul hired a group of various mercenaries to kidnap Tyger Tiger and Archie Corrigan, which included: Stump, Sheik, Scarface, Dumas, Rhys, and Barrett (aka Chief).[11] When Abdul encountered Wolverine, he sent demons against him. His plan backfired and Abdul was banished to the realm of his demons.[12]

Abdul was considered a superhuman,[6] has a number of magical abilities. He can teleport (usually appearing and disappearing in a cloud of green smoke) and mesmerize others. He has superhuman strength and durability, but this may be only a reflection of his ability to control the perceptions of others. His also able to summon demons from another realm.[1]

He was shown to withstand a direct gun shot at the head without suffering any damage (as if the bullet was swallowed by the shade under his hood),[13] or take a punch of Logan in the gut without even moving.[14]

If anybody can mentally resist psychic attack by the demons he summons generates a powerful feedback that banishes him to the realm of his demons.[1]

His powers are presumably magnified with the possession of the Necronomicon.[1]

Like this? Let us know!
Retrieved from "https://marvel.fandom.com/wiki/Abd-el-Hazred_(Earth-616)?oldid=6076342"
Community content is available under CC-BY-SA unless otherwise noted.