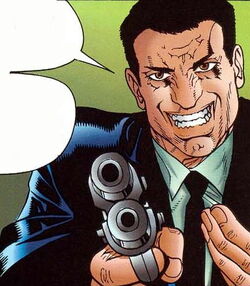 A manager of SquidCo, Abelard hired Machina Jones to hand over by his collaborator Richard Welk, a prototype of spokesclone created by Welk himself. In contemporary Abelard hired a "meat-puppet" by the Puppet Masters Inc. to kill Welk and appropriate of the spokesclone. The clone, Mr. Fizzi, had been made sentient by his creator and recognized in Abelard the man who had hurt Welk. At that point Machina Jones intervened in defense of Mr. Fizzi and killed Abelard by throwing him out the window of his building.

Like this? Let us know!
Retrieved from "https://marvel.fandom.com/wiki/Abelard_(Earth-928)?oldid=3398075"
Community content is available under CC-BY-SA unless otherwise noted.