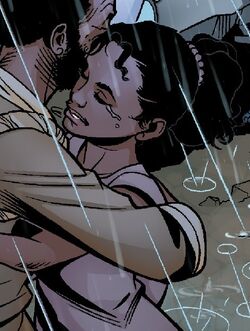 Abena was a member of the village of Obodo Agha in the Alkama Fields. She and her father, Kojo, began to worship the revolutionary Tetu after he summoned a storm to stop a drought crippling the region.[1] They eventually regretted swearing themselves to him, as the rain later turned into a deluge.

When the creatures of myth known as the Anansi invaded the Alkama Fields, Abena was one of several villagers abducted into a forest. Black Panther and the Hatut Zeraze confronted these creatures with the help of Storm, and rescued their victims. Storm personally returned Abena to Kojo.[2]

Like this? Let us know!
Retrieved from "https://marvel.fandom.com/wiki/Abena_(Earth-616)?oldid=5008228"
Community content is available under CC-BY-SA unless otherwise noted.